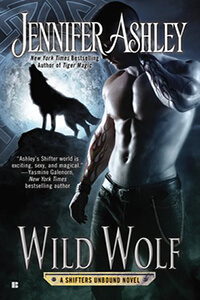 In the latest Shifters Unbound novel, a man has resigned himself to a life half lived. But a beautiful, courageous woman has him longing for something more…

Graham McNeil knows that his pack is unruly, but he’s not sure he can take the next step toward Shiftertown stability—choosing a new mate. After losing his mate and son long ago, Graham has worked hard to keep his heart in check. And even if he was inclined to bind himself again, his girlfriend, Misty, is human—a fact that won’t sit well with Graham’s old-fashioned wolves.

But Graham is up against a new enemy, one who could spell danger and death to all of Shiftertown. Graham must now defend his leadership and save Misty, the woman he has grown to love—before Shiftertown is pulled into an all-out war.

Graham wasn’t one of my favorite shifters up until this point. He was unhappy with not being Shiftertown leader and had a chip on his shoulder about it. However, in Wild Wolf we see him more with his individual pack and the bond he has with some of them. Unfortunately, he has to keep his personal relationship apart from the pack since she is a human. Being the Alpha, his mate must be with another wolf. They’ve been throwing themselves at him, but he’s resisted and stuck with his girlfriend Misty. He does know that at some point he’s going to have to break her heart and accept his fate. Knowing all this put him in a different light for me. He wasn’t the strong-willed bully trying to take over Shiftertown, there was a lot more to him. I grew to like his character more throughout the book. He looks out for his pack, and even takes in the little ones that give their foster mom too hard of a time. They are cute but sure are a handful!

Not all turmoil is in the mate department. Someone is messing with Shifters and Graham ends up in the middle of it. It is up to him to find a way to stop what is happening, or shifters are going to be in big trouble. The mystery worked itself up to a point where I was really worried for Graham. It was really surprising who comes to his aid. It was a tense battle, and more than a little heart stopping at times. The secret that is revealed though will be one that is not resolved easily. We meet a new being, definitely not fae, who will fight with the Shifters. He is going to be a very mysterious character for sure.

I really enjoyed Graham and Misty’s story. Graham steps up to the plate when the time comes to make his mate decision and takes on those of the pack not willing to accept his choice. Despite being human, Misty just fits as Graham’s mate and the pack has to see that.

Wild Wolf was definitely a great listen. Emotions were well narrated and Graham’s inner turmoil really came through. It is going to be interesting to see how this story arc plays out and how it affects the plans of secretly removing collars.