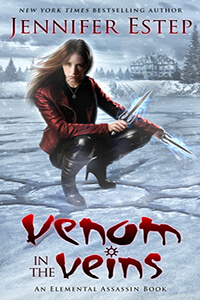 Blood might be thicker than water, but venom is stronger than just about anything …

It was supposed to be a nice, quiet, simple dinner with friends—but nothing is ever nice, quiet, or simple when you’re Gin Blanco, the Spider, notorious assassin and current queen of the Ashland underworld.

This time around, someone seems to be targeting Stuart Mosley, the president of First Trust bank. Lots of people have grudges against Mosley, but the more I investigate, the more Mosley’s problems seem to be connected to some of my own, especially when it comes to the Circle, the evil, shadowy group that is secretly responsible for much of the crime and corruption in Ashland.

But when another blast from my dark and deadly past as the Spider comes to light, I wonder if I’ll be able to survive this dangerous new enemy, who has a burning thirst for revenge that will only be satisfied with one thing: my death.

I normally read the Elemental Assassin series in ebook, but I had to use up a few Audible credits, so I grabbed it in audio. I do love it in audio! It just so happened that I was finishing up with another review audio, so I jumped into Venom In The Veins before going back to my audio binge series. Perfect timing. I am a huge fan of this series. There is so much to love!

Gin is still trying to find out as much as she can about the Circle and who the mysterious Mason could be. Gin and Finn are hoping to get some more information from Stuart Mosely since he was friends with Fletcher and may know more. However, Stuart is totally buried in the setting up of the auction of Mab Monroe’s estate. Unfortunately, in his harried state, he almost gets himself kidnapped. Thanks to Gin and her paranoia he is saved, but a whole new mystery opens up on who wants to hurt him. It also opens up some old wounds that Gin has been carrying around for years. But, one can only stay sympathetic for so long before that person does things that need to be stopped.

In every Elemental Assassin book, we are treated to many food references. Venom In The Veins made my diet a miserable thing to be on while listening to all the goodies everyone was eating. I love how this theme runs throughout the series and is something I look forward to in each book. Jennifer Estep knows how to write the descriptions of what each individual thing is so that it would make your mouth water.

The biggest draw of this series for me is the adrenaline rush. Gin is always in the middle of a crisis and her fights skim the edge of her death so closely that you never know whether she is going to survive. There are so many moments where you sit holding your breath just waiting to see if the next blow is going to take Gin down for good. She seems to get matched up with stronger and stronger enemies. It is exciting and keeps you entranced in the book. I think I broke one of my listening records with this one. I couldn’t stay out of the story long!

I was a tad disappointed with how a certain individual comes to Gin’s aid at a crucial moment. I prefer to see Gin pull herself up on her own. However, the information that unfolds at the end is fascinating and has me absolutely dying for the next book! It seems like with every new installment, Gin’s life gets more and more involved in the Circle. The revelation she makes in Venom In The Veins was mind blowing!

The narration was a pleasure to listen to. I love Lauren Fortgang’s southern accents. I think I enjoy listening to this series more than reading because of the narration. Lauren Fortgang does a much better job at Gin’s sarcasm than my imagination!