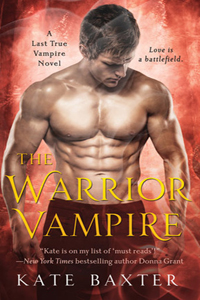 The vampire was built for sin, every inch of him tight and bulky with corded muscle. A killer, that much was apparent, and she couldn't help but wonder if his appetite for violence would rival his appetites for other...things.

Naya Morales is no ordinary mortal. Born with a shaman's power, she has devoted her life to tracking down stolen magic—and punishing those who take it. But one fateful night, she follows the alluring call of a sensual magic that is too glorious to be true—and finds herself face to face with a stunningly handsome thief who is too magnificent to resist...

From the moment he sees her, Ronan knows Naya is his mate. Driven by a deep, almost mystical connection, he aches for her body, hungers for her blood, and swears their souls are anchored together. Naya refuses to believe the words of a vampire—or risk the wrath of her tribe. But when she tries to make Ronan her prisoner, neither chains of silver nor fires of hell can help her escape the truth: she is the one who's been captured...

I liked Ronan in the first book. He was so loyal to Mikhail, and even played on the fringes of the vampire life to get what he needed. After he made his bed with that blood vow, I thought we were screwed and were not going to get a story from him at all. This little tidbit stayed in the back of my head the whole book. I was wondering, even if Naya and Ronan were able to get together, how were they going to get past his little pact back home?

Naya’s power leads her to Ronan and it’s not in a good way. But yet, she can’t kill him. He seems to have two sides and the magical side she needs to deal with is only their part of the time. The times he is himself, he is just too much for her to resist. She tries to keep her distance, knowing she may need to kill him, but he’s just so damn charming! Naya’s magic is strong, which is useful for her “family” and she’s been fighting against them and their demands for awhile. She may be pushing it too far with Ronan. I liked that she had that rebellious streak against the family where she just wanted to be left alone. I completely got that. These idiots she had to work for would have driven her into the ground with their demands! Keeping Ronan a secret came to be pretty hard with her trainee, and that caused a lot of fun.

Ronan needs to find his sister, but he gets wrapped up in this magic stuff pretty much from the time he hits town. I really like Ronan, and he was so charming in trying to win Naya over. However, I felt like he turned to working more with Naya than trying to find his sister. I think he thought it might lead him to her, but the lack of mention of her made me wonder if she was even on his mind. His world revolved around Naya.

When the storyline rolls out, the bad guys are kind of obvious. Some of their deeds though, surprised me. Overall, I was more interested in the relationship between Ronan and Naya. All the other stuff kind of felt obvious. Except for the sister part. I was really curious about her and kept wanting that part to fit in somewhere a little sooner.

Near the end, we see a Naya that was stronger than I even thought. Her whole world is going to change now and I really hope we get to see her grow in this new environment. Definitely a fun, conflicting couple. Naya’s resistance to Ronan was a lot of fun to watch. Not overly frustrating as you sometimes find. I will definitely be continuing. We still have interesting facts from book one, that worked its way into The Warrior Vampire. I can’t wait to see how they continue. I really enjoyed this book.