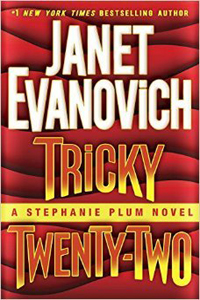 Something big is brewing in Trenton, N.J., and it could blow at any minute.

Stephanie Plum might not be the world's greatest bounty hunter, but she knows when she's being played. Ken Globovic (aka Gobbles), hailed as the Supreme Exalted Zookeeper of the animal house known as Zeta fraternity, has been arrested for beating up the dean of students at Kiltman College. Gobbles has missed his court date and gone into hiding. People have seen him on campus, but no one will talk. Things just aren't adding up, and Stephanie can't shake the feeling that something funny is going on at the college - and it's not just Zeta fraternity pranks.

As much as people love Gobbles, they hate Doug Linken. When Linken is gunned down in his backyard it's good riddance, and the list of possible murder suspects is long. The only people who care about finding Linken's killer are Trenton cop Joe Morelli, who has been assigned the case, security expert Ranger, who was hired to protect Linken, and Stephanie, who has her eye on a cash prize and hopefully has some tricks up her sleeve.

I’ve slowly been losing interest in this series. Tricky Twenty-Two may have been the killer. The last few books have pretty much been saved by Lula and Grandma Mazur. I didn’t find their antics as comical as before. The situations were different, but the basis for the joke was mostly rehashed from all the previous books.

Tricky Twenty-Two has Stephanie doing her usual thing trying to catch FTA’s with her flukey successes. I’ve been trying to figure out how she has gone twenty-two books living off of the pay of her captures. If I were Lula, I think I would be demanding some of that pay. In this book, kind of like the last, Stephanie is exploring her options. Kind of realizing that bounty hunting might not be her thing. Also wondering if maybe it is time she settles down. Could this be the end of this long running love triangle?

The choice may actually be made for her, which leaves her wondering if it was what she wanted. Too late Stephanie! But as always, she finds a way to put herself right back between Morelli and Ranger. Ugh! I used to be a Ranger fan. After this book, I can say I’ve moved on. I think the only dialogue we get from him is his typical “Babe”. Enough of the Babe already!

I think that Tricky Twenty-Two may be the precursor to the end of the series. With the way things ended, I don’t think there is going to be much story left for Stephanie. I have not heard any rumors about a twenty-three, but if there is, I’m guessing it will be the end. I don’t know if twenty-three is a really good number to end on though. We shall see.

If you’ve been one of those that have fallen off the Stephanie Plum wagon, I wouldn’t say you’re missing anything. My stupid, stubborn inability to let a series go unfinished will let you know when you need to jump back in!