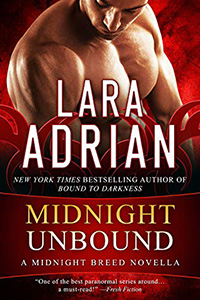 A lethal Breed warrior is called upon by his brethren in the Order to bodyguard a beautiful young widow he’s craved from afar.

As a former Hunter bred to be a killing machine in the hell of Dragos's lab, Scythe is a dangerous loner whose heart has been steeled by decades of torment and violence. He has no room in his world for love or desire--especially when it comes in the form of a vulnerable, yet courageous, Breedmate in need of protection. Scythe has loved--and lost--once before, and paid a hefty price for the weakness of his emotions. He's not about to put himself in those chains again, no matter how deeply he hungers for lovely Chiara.

For Chiara Genova, a widow and mother with a young Breed son, the last thing she needs is to put her fate and that of her child in the hands of a lethal male like Scythe. But when she's targeted by a hidden enemy, the obsidian-eyed assassin is her best hope for survival... even at the risk of her heart.

I didn’t realize I missed this one. Granted it’s a novella and doesn’t affect the overall arc with Opus Nostrum, which is probably why I missed it. I am glad I came back to read it though. I really enjoy the stories with the Hunters and how they are fitting into society.

Scythe is having a harder time dealing with being out in the world. After meeting Chiara and her son in a previous book, he hasn’t been able to get the Breedmate out of his mind. He’s determined, after events in his past, to stay away from her. But duty calls and the Order brings him in to help protect Chiara and her son after she’s been attacked.

I really liked Chiara. After all she had been through with her previous mate and that aftermath of his problems, she seems to have come out stronger and more independent. She is running her wine business and looking after her son on her own. All of her employees have been scared off. Chiara really objects to her son staying with the Order while her and Scythe go back to her home to try and draw out those trying to hurt her.

Scythe tries his hardest to focus on the job, not the woman he’s been dreaming about for weeks. I loved seeing his walls slowly break down. Chiara gradually wins his trust and he explains where his fears stem from.

The stories of the Hunters acclimating to society and finding their mates are really enjoyable. Scythe and Chiara’s story was nice to see two very strong people coming together in the midst of danger. This worked great as a standalone. Midnight Bound was a romantic story with a danger thread that I was actually kind of confused about, but the romance overshadowed it and the story itself was definitely a fun side story to this series.