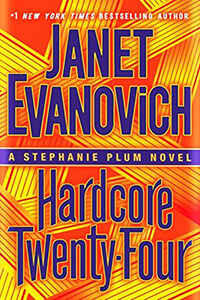 Trouble comes in bunches for Stephanie Plum. First, professional grave robber and semi-professional loon, Simon Diggery, won’t let her take him in until she agrees to care for his boa constrictor, Ethel. Stephanie’s main qualification for babysitting an extremely large snake is that she owns a stun gun—whether that’s for use on the wandering serpent or the petrified neighbors remains to be seen.

Events take a dark turn when headless bodies start appearing across town. At first, it’s just corpses from a funeral home and the morgue that have had the heads removed. But when a homeless man is murdered and dumped behind a church Stephanie knows that she’s the only one with a prayer of catching this killer.

If all that’s not enough, Diesel’s back in town. The 6-foot-tall, blonde-haired hunk is a man who accepts no limits—that includes locked doors, closed windows and underwear. Trenton’s hottest cop, Joe Morelli isn’t pleased at this unexpected arrival nor is Ranger, the high-powered security consultant who has his own plans for Stephanie.

As usual Jersey’s favorite bounty hunter is stuck in the middle with more questions than answers. What’s the deal with Grandma Mazur’s latest online paramour? Who is behind the startling epidemic of mutilated corpses? And is the enigmatic Diesel’s sudden appearance a coincidence or the cause of recent deadly events?

So, I continue on my journey of finishing or catching up on series I’ve left behind. I’m working on the Stephanie Plum series right now despite my irritation with Stephanie.

In Hardcore Twenty-Four, we have the mystery of missing heads. With the characters in this series, everyone immediately jumps to the conclusion of zombies. This causes a lot of chaos and curiosity. It had me wondering just what was going on. With Diesel in the mix for this book, there was always the possibility that there could be something like zombies. Diesel is such an enigma. But still, for this series, zombies didn’t make sense so I was dying to know what could cause everything being seen.

We also have the added benefit of Stephanie having to deal with Ethel the boa constrictor. Just another thing for Lula to be freaking about in this installment. Lula continues to be a character that truly makes me laugh. She’s just so outrageous you can’t help but be entertained by her.

I don’t even want to comment on the whole Stephanie / Morelli / Ranger thing. I want that whole storyline to end. Of course, if it wasn’t for the men, I don’t think Stephanie would survive.

Hardcore Twenty-Four had an interesting mystery with some good laughs. Stephanie brought on some frustration, as usual, but the story and side characters made it an ok read. Lorelei King made it an enjoyable listen. She really is a great narrator.