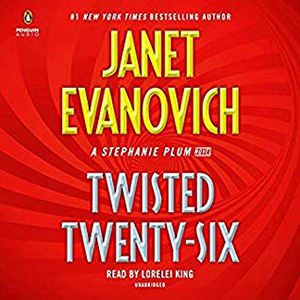 Grandma Mazur is a widow...again. This time her marriage lasted a whole 45 minutes. The unlucky groom was one Jimmy Rosolli, local gangster, lothario (senior division) and heart attack waiting to happen...well, the waiting's over.

It's a sad day, but if she can't have Jimmy at least Grandma can have all the attention she wants as the dutiful widow. But some kinds of attention are not welcomed, particularly when Jimmy's former "business partners" are convinced that his widow is keeping the keys to their financial success for herself.

As someone who has spent an entire career finding bad guys, a set of missing keys should be no challenge for Stephanie Plum. Problem is, the facts are as twisted as a boardwalk pretzel with mustard.

I know. You are all wondering the same thing I am. Why do I keep coming back, when I KNOW this series should just be over? I just have to finish a series I started. Especially one I have invested so much time in. Granted, Grandma Mazur and Lula continue to provide some comic relief. But even they can only do so much to overcome the whining we get from Stephanie. I’m sorry if this turns into a rant. I did it to myself by listening so I should just say a few words and leave it at that. I just have to get this off my chest though.

Maybe this is a wind down to her finally deciding to marry Morelli and start a family. Who knows. There was a lot of focus on Grandma Mazur in Twisted Twenty-Six, which brought on some much needed laughs. A few times, I even thought that Stephanie was finally catching on to the whole bounty hunter gig. She still isn’t carrying a gun, but she was a little more gung ho about her job. She also had Grandma to protect so when she wasn’t doing the poor me thing, she actually was acting like a stronger character.

I feel like the love for this series is lost and no matter how much I try, I’m not going to get it back. I wish I was one of those people who were able to jump ship books ago. It would be good to see Stephanie fit into the bounty hunter role and kick serious ass and hook up with Ranger. There could be a lot of hot, yet funny stories with them two as a couple romantically and her getting really good at catching the bad guys. I am so over Morelli!

I hope I didn’t trash this book too badly. I had great feelings of disappointment but I didn’t want to be completely negative. There are Grandma Mazur and Lula to think of. We really need Stephanie to grow up. At least the narration was good. I really love Lorelei King and her voices for these characters are so spot on. A good reason to continue I think!