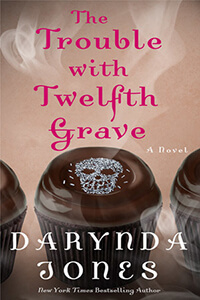 The Trouble With Twelfth Grave starts out a couple of days after Charley releases everyone BUT the true Reyes from the God Glass. One of the beings that has been released possibly has Reyes trapped inside him. He looks like him, talks like him, but is not the true Reyes. Once again we see this dynamic pair separated. There are scenes where it seems like it is Reyes showing through, but is really Reyazekene. (I probably spelled that wrong, I listened) Throughout the book, Charley is trying to nail down just how to get rid of Reyazekene and get Reyes out of him safely before Michael descends with a heavenly army to take him out.

Along the way, Charley does her best to stop one of the malevolent beings released from the God Glass from killing anymore humans. She’s truly hoping it is not Reyazekene that is doing the killings, but she has to find out which one it is so she can summon and destroy it. There is also a murder that needs to be solved to keep her friend Peri from being a prime suspect. It was fun seeing everyone join together to help Peri cover up any evidence found in her tattoo shop!

As usual with the books in this series, we are raced from problem to problem. Charley does her best with snap decisions with little sleep. There were some sad moments, and I have to say my biggest heavy heart was the lack of Charley/Reyes together time. However, this wouldn’t be a Charley Davidson novel without crazy shenanigans mixed in. Just wait until you read the part when Cookie comes to Charley’s aid to distract some staked out agents. I thought I was going to die laughing.

The Trouble With Twelfth Grave had me on an emotional roller coaster. So much happens and one minute you’re freaking out and the next your laughing your ass off. Plus, it all goes so fast. My head was spinning. It is definitely a book you want to block out some time and just sink in.

Once again, Darynda Jones left me screaming in rage at her ending. I don’t know how she can keep doing this to me. You would think I would learn that she’s going to kill me with a cliff hanger type of ending. It is maddening! She’s made these books like crack and I just can’t get enough. I’ve grown to love all of the characters in this series and every time something happens I freak out. Maybe I’m way too invested in these books.

As always, I truly recommend this series in audio. Lorelei King does a great job with these characters. Not only does she catch Charley’s sarcasm and wit, but she really gets Reyes’s voice too. That low, sexy sound. It’s truly amazing. This is one of my favorite author/narrator combos!