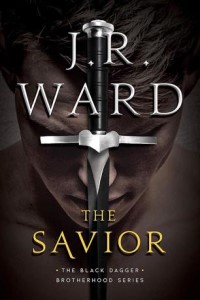 In the venerable history of the Black Dagger Brotherhood, only one male has ever been expelled—but Murhder’s insanity gave the Brothers no choice. Haunted by visions of a female he could not save, he nonetheless returns to Caldwell on a mission to right the wrong that ruined him. However, he is not prepared for what he must face in his quest for redemption.

Dr. Sarah Watkins, researcher at a biomedical firm, is struggling with the loss of her fellow scientist fiancé. When the FBI starts asking about his death, she questions what really happened and soon learns the terrible truth: Her firm is conducting inhumane experiments in secret and the man she thought she knew and loved was involved in the torture.

As Murhder and Sarah’s destinies become irrevocably entwined, desire ignites between them. But can they forge a future that spans the divide separating the two species? And as a new foe emerges in the war against the vampires, will Murhder return to his Brothers... or resume his lonely existence forevermore?

Book 17 in the Black Dagger Brotherhood series, The Savior is Murhder’s story. We’ve been waiting for his story for some time. He’s been mentioned many times in the previous books and has been a big mystery. Murhder is an ex-Brother. The one they say is insane. But the more you learn of his story, I didn’t really feel like he could be classified as insane. Suffering a bit of PTSD maybe, but not really insane. He’s been living in South Carolina for years, all alone. Living with his mistakes. However, the memory of someone he left behind haunts him, and when he starts getting letters from the person, he has no choice but to return to Caldwell and enlist the Brother’s help.

I really felt for Sarah. She has gone through a loss that she has a lot of guilt over. Then an FBI agent suddenly shows up and Sarah gets curious about what her fiance was really up to before his death. As the evidence piles up, Sarah takes it upon herself to investigate further, putting her in the path of Murhder.

In the Savior, we also see John Matthew going through a very serious situation that had me fearing for him. You would think that my fear would be for his relationship with Xhex, considering she is Murhder’s ex, but that was not it at all. I had a few bad moments holding back tears for the fighter.

The Savior felt like a return to the old books without too many storylines to keep up with. We were very focused on our couples with just a bit of the threat that Throe presents to the Brotherhood. With J.R. Ward I don’t trust getting an HEA. So I was uncertain where we were going to end up with our couples. This kept me reading with dreaded anticipation. However, I felt like the ending to Murhder & Sarah’s story was just too quick and convenient. Before the Virgin Scribe always had conditions, etc. for any miracles she would perform, but with Lassiter in the position things seem to happen without any sacrifices. I was a little disappointed by that. It’s possible he considered Murhder had been through enough, and that would explain his generosity. It was easy enough for Sarah to leave her old life to be with Murhder, but that still left obstacles that I thought should have been harder to overcome.

Otherwise, I really enjoyed being back in Caldwell. Murhder is definitely a new favorite character and I am excited to see what transpires with him and the Brothers. There is definitely that connection between him and John Matthew which is bound to lead us down the Darius path. I felt like The Savior was much more focused and easier to read that some of the more recent releases. I’m glad I stuck with the series and was rewarded with such a good story this year.