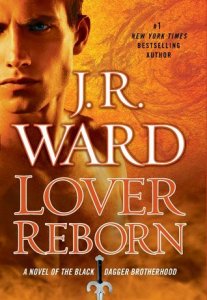 Ever since the death of his shellan, Tohrment has been a heartbroken shadow of the vampire leader he once was. Brought back to the Brotherhood by a self-serving fallen angel, he fights again with ruthless vengeance, unprepared for a new tragedy. Seeing his beloved in dreams—trapped in a cold, isolated netherworld—Tohr turns to the angel Lassiter to save his former mate. The only way to rescue her is for Tohr to love another. As war with the lessers rages, and a new clan of vampires vie for the Blind King’s throne, Tohr struggles between an unforgettable past and a hot, passion-filled future. But can his heart let go and set all of them free?

I’m going to put in a warning right now that if you have not read the other books in the series, there are probably going to be spoilers.  You should probably stop reading now.  To start the series from the beginning, go ahead and enter the contest below today, it’s the last day so make sure you get those entries in!  You can also purchase the books from my store, either with the link to the right, or from the tab at the top.

Lover Reborn is Tohrment’s story.  Tohr is in hell.  After losing his shellan and unborn child, Tohr’s only purpose is to avenge them.  He puts himself out there not caring about himself with the notion that someday the enemy will best him and he can be with Wellsie in the Fade.
Tohrment’s story is so hard to read.  The agony he is going through just breaks my heart.  But so does No’one’s, so their relationship leaves me wondering if either one of them is ever going to be happy.  (Of course you find out at the end, but only after some pretty intense scenes!)  Tohrment’s fears are understandable for someone in the grieving process, but is his grief so consuming that he can’t see what his fears do to others?  I don’t mean just to No’one either.  The impact his grief and self-destructive attitude makes it hard for the other Brothers to trust his ability to back them up in fighting situations.
I thought that Lassiter’s job was to bring Tohr back to the Brotherhood, and that he did that but enjoyed irritating them so much he decided to stay.  Now we see what his real purpose is, and in this book, we see that time is running out for him.  He needs to stop watching his talk shows for awhile and get to work!  I love Lassiter.  He makes me laugh with his commentary and tv preferences.  I wonder if we will ever see him with his own book.
This book also tells us about the struggles John Matthew is going through with Xhex.  Is it possible that he is going to lose her?  This part of the story was so frustrating for me.  I just wanted to shake the both of them and and make them see that compromises could be made.  Ugh, I’m still pissed just thinking about it.
Xcor keeps learning new things about himself.  Will those things change his plans eventually?  His situation keeps getting more and more complicated.  There are so many ways his story could go, I can’t wait to read more.
Whew, there was so much going on in this book.  It was like this huge roller coaster that I never wanted to end.  Ok, that would be a bad analogy, considering I am scared to death of roller coasters and would want them to be over immediately!  You know what I really, really want?  More of Rhage.  I really hope Ms. Ward puts some more of him in the next book.  I love his sense of humor.  He is just awesomeness.  I also want more of Lassiter too.  Ah, how long is it before Quinn & Blay’s book?  Can I wait that long?  I don’t think I can stand it!  Let me know what you thought about Lover Reborn in the comments!