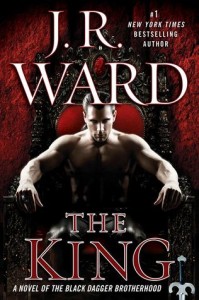 J.R. Ward's # 1 New York Times bestselling Black Dagger Brotherhood continues as a royal bloodline is compromised by a grave threat to the throne.

After turning his back on the throne for centuries, Wrath, son of Wrath, finally assumed his father’s mantle--with the help of his beloved mate. But the crown sets heavily on his head. As the war with the Lessening Society rages on, and the threat from the Band of Bastards truly hits home, he is forced to make choices that put everything--and everyone--at risk.

Beth Randall thought she knew what she was getting into when she mated the last pure blooded vampire on the planet: An easy ride was not it. But when she decides she wants a child, she’s unprepared for Wrath’s response--or the distance it creates between them.

The question is, will true love win out... or tortured legacy take over?

I was so excited to finally have this book in my hands! I have, however given up the whole “this is Beth & Wrath’s story” mentality. The Black Dagger Brotherhood books now have a lot of stories in them and yes, there is a “main” couple, and you see a fair amount of them, but you also get quite a bit of build up for future books. I did not feel like I didn’t have enough Wrath & Beth. We had Wrath’s parent’s back story as well as their current plight, and to me, that covered a lot of ground on their story. I went in expecting a lot of different story lines, so maybe I wasn’t so put off by it. I’m sure that all the little threads that are showing up in this book are going to be significant in later books. My problem will be remembering them! I will admit, I’m starting to have a hard time keeping track of everybody from book to book. I had to keep reminding myself of who Assail is and what all he’s done in the prior books.

I found The King to be a book of strong emotion. Wrath and Beth had me so torn in their story that I raced through their portions just dying to know how it all worked out. The pain and frustration for both sides of the cause was excruciating. I just wanted things to be happy with them again no matter which way the whole baby situation worked out.

I am also totally conflicted and frustrated with the Layla and Xcor situation. I am not happy with it and it makes me sort of angry that Layla is even speaking to Xcor. I know that it will work out somehow, someway, but at the current moment, I am not an Xcor fan at all. He is your typical bad guy and I didn’t see him having the patience to work his way into the top dog position by controlling the glymera.

The stories of Trez & Selena, Assail & Sola, Layla & Xcor are woven though out and yes, they did take up some real estate, but I didn’t feel like I missed anything with Wrath & Beth. I have to admit that I had to go back and look up Sola’s name, and when I was doing that I was reminded of the Trez & Selena storyline. I had forgotten about them! We get to see some of the Brotherhood members, but not as much as I would have liked. What can I say, I have a thing with Rhage and Lassiter and think they definitely need more face time.

So, on to the first book with the Shadows as our main group. I am trying to stay away from spoilers, so I am not certain the book will be Trez’s, but that is my guess. I am a bit disappointed our focus is taken away from the Brotherhood and the Band of Bastards storyline, but as with all the more recent books in this series, I’m sure we’ll have some of it woven in on the sidelines. Just enough to let you know there is something going on.

I think that if I was the type of person who could stop reading a series before it ended, this would probably be the place to stop it. We are not seeing many of the original characters anymore and the small snippets of the other storylines are minor enough that they may not pull enough interest for someone to want to continue. I am not that type of person, however and will continue on. Long live the King!

Waiting On Wednesday ~ The Thief by J.R. Ward @JRWard1