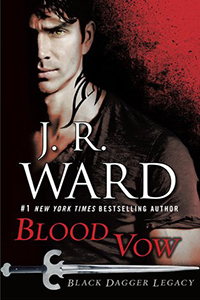 The Black Dagger Brotherhood continues to train the best of the best to join them in the deadly battle against the Lessening Society. Among the new recruits, Axe proves to be a cunning and vicious fighter - and also a loner isolated because of personal tragedy. When an aristocratic female needs a bodyguard, Axe takes the job, though he's unprepared for the animal attraction that flares between him and the one he is sworn to protect.

For Elise, who lost her first cousin to a grisly murder, Axe's dangerous appeal is enticing - and possibly a distraction from her grief. But as they delve deeper into her cousin's death, and their physical connection grows into so much more, Axe fears that the secrets he keeps and his tortured conscience will tear them apart.

Rhage, the Brother with the biggest heart, knows all about self-punishing, and he wants to help Axe reach his full potential. But when an unexpected arrival threatens Rhage and Mary's new family, he finds himself back in the trenches again, fighting against a destiny that will destroy all he holds most dear.

As Axe's past becomes known, and fate seems to be turning against Rhage, both males must reach deep - and pray that love, rather than anger, will be their lantern in the darkness.

In my effort to catch up on series, I’ve jumped into the Black Dagger Legacy series by J.R. Ward. I’m a big Black Dagger Brotherhood fan and had actually read book 1 of the Legacy series quite some time ago. I purchased the follow up books just hadn’t gotten around to reading them. I think I felt the first one was kind of young for me, and that put me off continuing the series. But, I grabbed the audios in the series and decided this was the next catch up series on my list. I had been feeling like I’d been missing some things when reading the BDB that I know happen in the Legacy books.

The Legacy series features the trainees of the BDB’s training program. They also feature one of the main BDB couples and a struggle they are dealing with. In Blood Vow we see Axe and Elise as well as Mary and Rhage. Now Rhage is my favorite Brother. I know this book was supposed to be focused on Axe and Elise, but I was much more interested and invested in the Rhage and Mary pieces.

As with Blood Kiss, there is a romance between a female from high society and a male from the general public. There is also the controversary of the male not believing they are good enough for such a female. If I remember right, Paradise and Craig were this way in Blood Kiss. Axe has a heart wrenching history that has made him put up a wall, not wanting to repeat the mistake of his father by falling in love and not being able to have that person. His relationship with Elise is very short, but their connection is quick. Elise is not like other girls of the glymera. She’s down to earth. She’s a teacher’s assistant at the local university working towards her degree, against her father’s wishes. She doesn’t want to be a part of the high society rules and life. Especially when she sees what it did to her cousin and her cousin’s relationship with her mother. Elise does want to figure out what is going on with her family. You pretty much know all along what it is that is going to stick a wedge between the two. While you are reading it is something that is hanging over your head and you just wait for the shoe to drop. I did feel really bad for Axe because his whole life had been changed when Elise came into it, and now he was left alone.

I think this book was set up to make me sad and cry. I was sad for Axe, but to make it worse was Rhage and Mary’s story. I will admit I was much more interested in their story than Axe and Elise’s. Rhage is my favorite Brother and what he and Mary went through in Blood Vow just about killed me. My heart broke for the two of them as they were stuck in a sinking hole. They went from being so incredibly happy to one of the most horrible experiences. Yes. I cried. I couldn’t stand to see my Rhage going through this hell. Even though I had read the BDB books that come after this and know how the story works out, I still felt so much pain for this couple.

Blood Vow gave me the gift of a new couple’s story while getting a piece of a Brother’s life as well. I loved that. I still kind of feel like the trainees are a bit more immature than I’d normally read, but that is a preference of mine which I’m sure would not be a big deal for most people. I actually think Ward does a great job in writing the characters so you can see the difference in maturity levels between the trainees and the Brothers. Blood Vow was a really good read, and I’m glad I have gone back and picked it up.