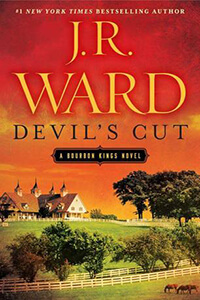 In #1 New York Times bestselling author J. R. Ward’s thrilling finale of the Bourbon Kings series, the Bradford family dynasty teeters on the edge of collapse after the murder of their patriarch—and a shocking arrest.

At first, the death of William Baldwine, the head of the Bradford family, was ruled a suicide. But then his eldest son and sworn enemy, Edward, came forward and confessed to what was, in fact, a murder. Now in police custody, Edward mourns not the disintegration of his family or his loss of freedom . . . but the woman he left behind. His love, Sutton Smythe, is the only person he has ever truly cared about, but as she is the CEO of the Bradford Bourbon Company’s biggest competitor, any relationship between them is impossible. And then there’s the reality of the jail time that Edward is facing.

Lane Baldwine was supposed to remain in his role of playboy, forever in his big brother Edward’s shadow. Instead he has become the new head of the family and the company. Convinced that Edward is covering for someone else, Lane and his true love, Lizzie King, go on the trail of a killer—only to discover a secret that is as devastating as it is game-changing.

As Lane rushes to discover the truth, and Sutton finds herself irresistibly drawn to Edward in spite of his circumstances, the lives of everyone at Easterly will never be the same again. For some, this is good; for others, it could be a tragedy beyond imagining. Only one thing’s for certain: Love survives all things. Even murder.

Devil’s Cut by J.R. Ward is the third and final book in the Bourbon Kings trilogy. I’m a huge fan of J.R. Ward’s Black Dagger Brotherhood, so therefore HAD to read this trilogy as well. I am SO glad I did!

We take off right from the ending of Angel’s Share. True to Ward’s BDB world, we have more than one storyline going on throughout the book. Sometimes that makes it hard to read a book, but it was really necessary in Devil’s Cut. We follow Lane, Edward, Max and Gin through the aftermath of William Baldwine’s death. The mystery of who truly killed William is still in question. Edward admits to it, but we all know he didn’t do it and is taking the blame for somebody else. Who though?!

The family’s life has been turned upside down and each of the children are trying to rebuild their lives without all the riches they once had. In fact, they are trying to keep themselves from basically living on the streets. Lane, who is trying so hard to keep things together, seems to be constantly running on adrenaline. He’s the only one left that is not in the middle of a major crises.

At the end of Angel’s Share, we see Gin getting things together for Amelia. She just knows that Richard is going to kill her. Gin continues to grow as a person and a mother throughout Devil’s Cut. She makes pretty big reveals despite what those revelations will do to her and her life.

I think I could go on and on with this book. Possibly the whole trilogy. I was drawn into this story and felt every bit a part of the drama that was unfolding. I laughed and yes, I cried. This was one of those reads where you just want the story to go on forever, even though we’ve had the HEA. This is definitely a recommended read!

Grab your chance to read one of my favorite books of the year and enter the giveaway below!