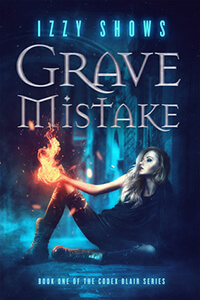 I am Blair Sheach. Screw up. Outcast. Wizard.

My life will never be the same. Let's just say, new found powers do not a hero make, and I've never been an exception. It was supposed to be a simple case: find the client's deadbeat, cheating husband, collect money, and finally pay my rent. Turns out the wanker is a necromancer hell bent on destroying London. Turns out necromancers are only part of the problem in a city infested by vampires and demons. And magic cops aren't any better at cleaning them up than mundane ones. Then there's me, I'm no one special. Just the last line of defense.

I'm out of luck and out of time. And to save my city, the decision I have to make is one I can't take back.

Grave Mistake by Izzy Shows was a short and exciting listen. It seems the story is packed full with Blair running on full steam from problem to problem trying to catch the necromancer that is raising the dead to try and take over London.

I found Blair extremely hard on herself. Out on her own believing that no one cared and she didn’t have any friends. Now, however, her relationship with Fin is a closer friendship than she really wants and Aedon, the man that discovered Blair’s powers and wants to develop them is around. Many more people than she’s used to.

For the first little bit, I thought that we were starting out with a private investigator story for Blair. But with the evidence piling up about the city being taken over, we switched to concentrating on saving the city. I’m not sure why I didn’t put 2 and 2 together to realize this was going to work out to one storyline.

As the book goes along and with a little help from Aedon, Blair discovers her powers. Powers that she can’t let the council know she has for fear of being killed. With the way the confrontation goes down, I really worried if Blair knew enough to save herself. Fortunately with the adrenaline rush of being attacked helps bring powers that Blair didn’t realize she had.

Grave Mistake was a quick listen with some good excitement as Blair chases down the necromancer and she tries to stop the necromancer’s attempts to take the city. The storyline was packed, running from problem to problem without a lot of fluff to spread the story out. I was disturbed by Blair’s attitude towards herself. I hope she works on that in the future. It always made me feel bad for her, but then it got to a point that it annoyed me.

This was my first listen with all English accents, and I found it wasn’t as difficult as I thought it was going to be. I think the voice for Blair was really well done portraying her attitude.

Grave Mistake is good for when you want something with some excitement but don’t want to get invested in a long, drawn out storyline. There was no need for a lot of world building, etc., which I think helped keep it short. 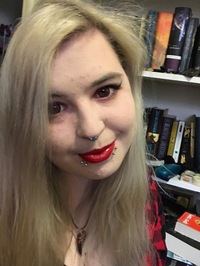 I write urban fantasy novels for new adults. I read just about everything–fantasy, science fiction, dystopian, historical fiction, and much more. I’m also an avid LARPer. Don’t know what that is? Shoot me a message and I’ll gab your ear off about it. I love to talk with fans, so don’t be shy–be forewarned, though, I can rant a good bit.
​
I grew up in Wilson, North Carolina. It’s a small town about an hour east of Raleigh, and I spent most of my time finding adventure, filling up notebooks with every story that came to my head, and being reprimanded by teacher’s for reading in class. My first fiction novel came out in January of 2017, and I release about every two months; so sign up for the newsletter to stay on top of things!
​
Feel free to send me an email or reach out over social media with any questions you might have, or just to chat!