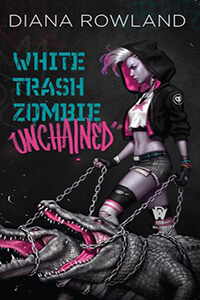 Angel Crawford has finally pulled herself together (literally!) after her disastrous dismemberment on Mardi Gras. She’s putting the pieces of her life back in order and is ready to tackle whatever the future holds.

Too bad the future is a nasty bitch. There’s a new kind of zombie in town: mindless shamblers, infectious and ravenous.

With the threat of a full-blown shambler pandemic looming, and a loved one stricken, Angel and the “real” zombies scramble to find a cure. Yet when Angel uncovers the true reason the plague is spreading so quickly, she adds “no-holds-barred revenge” to her to-do list.

Angel is busting her ass dealing with shambling hordes, zombie gators, government jerks, and way too many mosquitos, but this white trash chick ain’t giving up.

Good thing, since the fate of the world is resting on her undead shoulders.

If you haven’t heard of it before, the White Trash Zombie series follows Angel Crawford. She starts out as a drug-addicted high school drop out until one day she is turned into a zombie and finds herself working in the county morgue. Fast forward six books and we have a totally different Angel. She’s been through a lot. Has spent some time rotting and then recuperating. Now she is out in the world again, ready to get back to work and school. Unfortunately, things start to go out of control right from the minute she is finally able to leave the Tribe’s lab.

There is a new kind of zombie in town, Angel calls shamblers. Angel believes that something that she did in a previous book is what started this epidemic and works like crazy to figure out how to fix it.

I love Angel. She is funny and quick-witted. However, she is very down on herself. It was so great to see how, despite her part in the shambler epidemic, she grows into herself. She starts to see how valuable she is as a person. She’s been through a lot and has played big parts in solving mysteries and crimes against zombies. It’s about time she saw her true worth.

I was so frustrated, along with Angel, when the Tribe turns to someone they should know better not to trust. Eyes are kept on this person, but their involvement reaches even farther than originally thought. Angel doesn’t hold back and her treatment of this person had me yelling a good “Hell yeah”. Angel must be the queen of comebacks!

The connection that Angel plays with the shamblers is really interesting. They respond to her in unexpected ways and she is pretty much treated as a zombie mama with them. I love how protective she gets, especially with the infected gators. There is definitely a tie between the infected and Angel.

I had an amazing time with this book. I laughed out loud too many times to count and may have even been a bit sad at one point. There are a lot of interesting developments throughout the book. New zombie supporters, Chang surprises. It was just so much fun.

I listen to this series because I believe Allison McLemore narrates this like a boss. She is totally Angel and gets her sarcasm and accent right on point. She is totally the icing on this amazing book!

Diana Rowland worked as a bartender, a blackjack dealer, a pit boss, a street cop, a detective, a computer forensics specialist, a crime scene investigator, and a morgue assistant, which means that she’s seen a lot of weird crap. She won the marksmanship award in her Police Academy class, has a black belt in Hapkido, has handled numerous dead bodies in various states of decomposition, and can’t rollerblade to save her life.