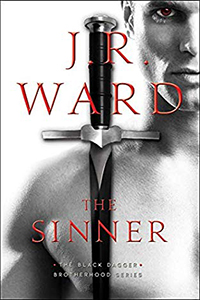 Fate anointed Butch O’Neal as the Dhestroyer, the fulfiller of the prophecy that foresees the end of the Omega. As the war with the Lessening Society comes to a head, Butch gets an unexpected ally in Syn. But can he trust the male—or is the warrior with the bad past a deadly complication?

With time running out, Jo gets swept up in the fighting and must join with Syn and the Brotherhood against true evil. In the end, will love true prevail...or was the prophecy wrong all along?

Syn is a member of the Band of Bastards and hasn’t gotten caught up in the new life that they have living in the mansion with the King. His beginnings were tragic. His driving force to kill he attributes to his father. He has lived hundreds of years appeasing himself by killing. When he meets Jo, he knows instantly that she is his shellan. His drive to protect kicks in but he thinks he can live without fully committing.

Jo, however, is as feisty and persistent as ever. She has been trouble for the Brotherhood for years with her investigations and now she is finding herself fully immersed in it. I really like Jo and was glad that she was finally coming into the world. The familial connections all seemed really convenient, but it did bring in another facet to feature Butch.

Speaking of Butch, it is his time to shine! I was so nervous for him. He hasn’t known his destiny all that long, and now all of the vampire race is depending on him. It weighs on him more every night as the lessers dwindle down. He prepares to fail and that was breaking my heart.

Ah, and now we are left with a very big surprise. A beginning. I did not read the Fallen Angels series, so I’m not familiar with this character, but I think we’re going to get to know her really well!

I felt like Butch took up a lot of this book and kind of overshadows the romance. I did enjoy Jo & Syn. The sacrifices Syn is prepared to make for Jo really surprised me because I didn’t know how he was going to be able to follow through. It was just not in the vampire nature to stay away from his shellan. That he felt like he had to was so sad.

I didn’t feel like the final confrontation was as intense as I had envisioned it, but we do get the robin’s egg for our future. I’m excited to see how the story is going to carry on with this new threat.