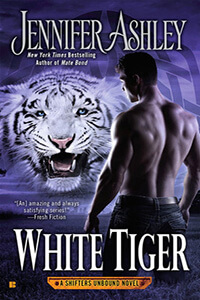 A woman is lured into the shadows of a dangerous manhunt...
Wanted and on the run...

For twenty years, Kendrick, a white tiger Shifter, has been the Guardian of un-Collared Shifters who spend their lives living in secret—and in fear of being shunted into Shiftertowns. When Kendrick’s group is discovered and forced to flee, Kendrick is more desperate than ever to protect them

His only salvation was in a beautiful stranger.

In a diner in the middle of nowhere, lonely waitress Addison Price has seen a lot of unusual drifters come and go, but none has ever captivated—and intimidated—her like the imposing fugitive who wields a broadsword with incredible skill. But when he risks all to protect her, Addison’s fear turns to empathy—and empathy to desire as she learns more about her savior. Soon she’s more than willing to help the crushingly sensual white tiger and his cubs in a passionate bid for freedom. Whatever the cost.

After the uncollared shifters are blown out of their hiding place and their leader takes off, I knew we were going to get to know more about these new shifters. Initially I was not a fan of Kendrick. I think it was the way his pack was introduced. But to see him out in the real world with his cubs, my opinion was changed. I was anxious for him to find a permanent home for those cubs. Kendrick’s interest in Addison kept him coming back to her diner, even when he knew he should be moving on.

Addison was fascinated with the man and two children who visited the diner every night for pie. Watched for them. But she didn’t understand what she was in for that fateful night. Then she is off with this man and his children running for their lives. To protect her sister and family from those that want Kendrick, she must stay away from them. That leaves the only solution is to run with Kendrick.

I went softhearted at Kendrick’s care for the cubs. Before I saw him as a crazed uncollared shifter out to ruin everything the shifters already had. But I slowly understood him and he soon became a favorite with that big heart of his. His love for his pack was immeasurable. He really broke me down. Addison struggles with falling in love with a shifter and being away from her family. Soon though, she is fitting right in like a glove.

After the book that Kendrick’s pack gets split up, I’m not surprised that Dylan and some of the Austin men end up in this story. I’m conflicted with Dylan as he is not supposed to be Shifter Leader anymore, but he seems to still have control over the men of the pack.

The ending was exciting and had me holding my breath. Secret underground tunnels and rooms of treasures. It was a fun, thrilling adventure. It was definitely up there in my favorites of this series, but there are so many good ones, it is getting hard to pick just a favorite of them all. I think Kendrick and the settlement of his shifters really told a story of who Kendrick was and he wasn’t who I thought him to be. He has a big heart and he stole a chunk of mine!

Cris Dukehart’s narration kept the pace and kept up the excitement level needed in big parts of the story. I was really glad to hear her voice after the novellas that took on a different narrator. Cris was just meant for this series and it was hard staying in the world when it wasn’t her.