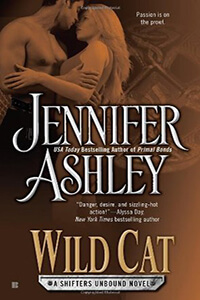 Heartbroken from the death of her mate three years ago, Shifter Cassidy Warden is tracking down his mysterious killer-one who could bring danger to all Shifters. But Detective Diego Escobar rekindles the flames of her mating desire. And once the fires begin, nothing and no one can put them out...

Wild Cat is the first book featuring the Las Vegas Shiftertown. Cassidy is second in command which makes her pretty dominant. Her mate was killed and Cassidy is out to find the killers. In tracking them down, she gets caught on a construction site way up in the middle of an unfinished building. Diego Escobar must deal with his fears to capture her. Cassidy saves his life, yet he still arrests her. Diego has feelings right away about this snow leopard and he wants to protect her from whatever might happen if she goes to jail. He does some finagling and Cassidy becomes his responsibility.

I really liked Cassidy. She was dominant and fearless, just the way I like my heroines. I am surprised that she is not more devastated by her mate’s murder. I understand her wanting to get revenge, but from what I’ve read so far, some shifters actually become so depressed they become almost comatose. Cassidy on the other hand is ready to crack some heads. The attraction to Diego was kind of unexpected for me too. I just thought she would be more hung up on her mate, I didn’t think a romance would blossom so quick. It made me wonder if Cassidy and her dead mate had the mate bond with each other.

Diego coming into Shiftertown with his feelings for Cassidy and as a cop had Eric worried, but Diego proves himself to be trustworthy. He is dominant enough to not be intimidated by the alpha’s in the Shiftertown.

A lot of different scenarios are playing out in this book. I think they helped fill the book out and set us up for books to come. I felt kind of off kilter being in a whole new Shiftertown with all new characters. I had to learn the hierarchy all over again. That made this book go a little slower for me while I got my brain straight on who was who.

I was a bit unsure of how I felt about Cassidy getting into another relationship so soon after her mate’s death, but it works and I guess that is what matters. She is happy and that is the way their town needs her, so she can help the other women of their crowded Shiftertown. Overall, I will say it was a really good book for the series and being in a different Shiftertown opens the doors for the author to tell even more stories. That I have to have, because I’m loving this series and don’t want it to end too soon.

I’m really enjoying Cris Dukehart’s narration of the series. She does really well with accents and doesn’t make the dominant males sound too gruff. I think she is a good fit for Shifters Unbound.