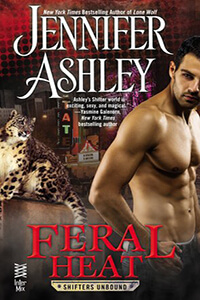 Jace Warden is sent to the Shiftertown in Austin to find a way to free all Shifters from their Collars. But pulling off the Collars can cause Shifters to go mad or kill them outright.

In Austin, Jace meets Deni Rowe, a wolf Shifter with troubles of her own—she was deliberately run down in the road, and while her body has healed, she still has episodes of total memory loss during which she retreats into her pure animal self.

Jace has never met anyone like Deni. Courageous and beautiful, she volunteers to help him test the Collar removal. And as Deni and Jace work together, they feel the mate bond begin. But can Jace help Deni believe she can heal enough to be anyone’s true mate?

Deni has a pretty bad case of PTSD, and when it strikes, she loses her memory and is completely taken over by her animal. We’ve seen some of the destruction she’s done during her episodes already, and it is devastating to the family.

Then we meet Jace, who has been asked by Dylan to come help with the collar situation. He is told to meet Dylan at the site of the fight club which is where he meets Deni. She rescues him from an attack and the two really hit it off. I mean really hit it off!

Jace seems to have so much patience, and totally believes that he can help Deni overcome her PTSD symptoms. It was so great to see Deni slowly come to trust herself and be comfortable around people without worrying about her animal taking over.

These two are really great for each other. I was worried about how the relationship was going to work with Jace being from the Nevada Shiftertown and Deni, the Austin. She had her kids to be near and I’m glad they worked out a solution for the problem.

The testing with the collars is difficult due to police presence for some unknown reason. They have to be careful to hide what they are doing and Jace as well, since he does not have permission to be away from his shiftertown.

I enjoyed this couple mainly because Jace was just so good for Deni. They do seem to have two completely different lives, but that is what makes these mate claims so surprising at times. They are bringing together characters you wouldn’t expect and making things work. Thus, we are getting the evolution of a relationship with the overall story arc of the collars. That story arc did not progress much during this novella, but that is to be expected. I imagine more will come on that in the full length books.