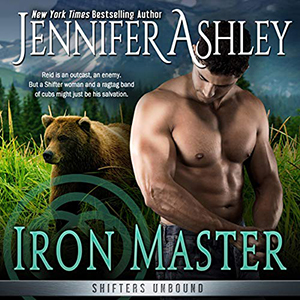 Stuart Reid is an Iron Master—a Dark Fae with a rare ability to make iron do his bidding. Exiled by the High Fae who fear him, he now lives in a simple house in Shiftertown outside Las Vegas, watching over Peigi, a bear Shifter woman, and the cubs she cares for.

Peigi, rescued from an evil Shifter and welcomed into the Vegas Shiftertown, knows Reid and the cubs have helped her survive and heal.

She also knows Reid is alone and lonely, a strong man coping with his exile. The bond she feels pulling her to him scares the crud out of her—she’s been down this road before.

When Reid’s people send him a desperate call for help, Peigi senses danger to him—too much of it. She finds she’ll do anything, even sacrifice herself and her happiness, to keep him safe.

It’s been about two years since we saw our last Shifter’s Unbound book. There were a couple novellas, also in 2018. I missed the Christmas one and I think it is in audio now, so I’ll have to go back and listen.

I was so excited to finally be getting the next installment of this series. For Iron Master, we are located in the Vegas Shiftertown. It has been a long time for me, so I was a little confused on who was who. There are flashbacks reminding us of the characters and some of their previous problems.

Stuart is a Fae that has been exhiled to the human world. His power is to work iron. That power becomes necessary in some Fae wars going on and he has been asked to come back. All this time he’s been in the human world, he’s been living with Peigi and the shifter kids she has taken in. Stuart has had feelings for Peigi ever since the Vegas pack rescued her. He just wants them all to be together as a family. This call back to the Fae world jeopardizes his relationship just as the two are making progress.

In Iron Master, we run into old foes, and crazy magic. Stuart feels the pull between giving the Fae the magic only he can give them and keeping Peigi with him. However, as the story draws to an end secrets are revealed and the real hero of the story is a surprise. Stuart is left to make the decision on staying with his people or returning to the Vegas shifter town with Peigi.

I LOVED this story and how we have a mixed Fae and Shifter couple. After all Peigi has suffered I was so happy to see her get an HEA. Iron Master is left with some great open ends and I’m excited to continue on in this world to see how things work out!