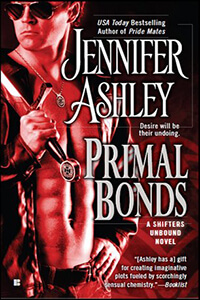 When half-Fae, half-Shifter Andrea Gray flees an abusive would-be mate, the only way she is allowed to relocate to the Austin Shiftertown is if a Shifter there claims her as mate.

Sean Morrissey, the Guardian of his clan and all of Shiftertown, is mateless, lonely, and has a tough job--to send the souls of deceased Shifters into the afterworld. He volunteers to claim her, sight unseen, but doesn't realize that one look at the gray-eyed, dark-haired Andrea will stir the mating frenzy in him. Even though the mate-claim isn't finalized, official, or yet blessed, Sean will do anything to get Andrea into his life and keep her there, forever.

I adore Sean. He is brother to the Shiftertown Alpha, and also the town’s Guardian. A Guardian is a Goddess blessed individual with a big sword that he uses to send the souls of dead Shifters to the after life. He also carries around a lot of grief and regret about one of his brothers that went feral. He is loyal to his clan and even sacrifices to mate claim an outsider just to save her from an abusive situation.

Andrea is running away from a bad situation and doesn’t trust or understand why the Austin Shiftertown is giving her this opportunity. Especially knowing that she is half fae. I think she was surprised that Sean just didn’t demand a mating, but calmly let her get to know him first. Andrea lives with her aunt Glory who is with Dylan, Sean’s father. We get to see those two through some scenes as well, which I enjoyed.

I think that Primal Bonds will be forever dubbed as the “underwear book”. It is just too funny of a situation, and Andrea sure knows how to play it.

Humans are attacking Shifters and Sean has a hard time trying to keep Andrea from getting in the middle of the investigation. She’s stubborn and doesn’t want to be coddled. But Andrea finds out some very interesting things about herself that make her an asset. Her fae side can’t be all bad.

I loved Primal Bonds. Sean and Andrea make such an awesome couple. Their banter back and forth is great and you just know these two are meant to be together. The action and mystery were enough to keep me on the edge of my seat. What Sean and Andrea learn about each other, due to Andrea’s fae side is fascinating and will make her a very important person in the Shiftertown.

Cris Dukehart narrated Primal Bonds and I think she did a really great job. It’s hard with those Irish Morrisseys!