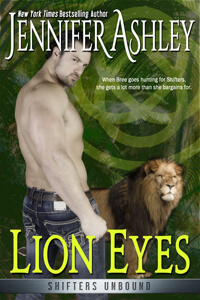 Bree has just decided to give up trying to be a Shifter groupie when a lion Shifter slams into her truck and tells her to drive. Seamus is on the run from hunters, other Shifters, and who knows who else. All Bree knows is that he’s compelling, needs her help, and most intriguing of all, wears no Collar …

Seamus McGuire fears he’s gone crazy—feral—and become a killer. His only hope of getting away from the hunters and police on his tail is Bree, a human woman who not only knows a lot about Shifters but has great compassion for them.

Things are more complicated than they seem, however. Seamus is on a mission, to protect those in his care after the destruction of Kendrick’s compound of un-Collared Shifters. Seamus must keep it together and keep his charges hidden, but at the same time, he’s pulled to Bree as he’s never been pulled to a woman before. He needs to prove he’s innocent and not crazy before it’s too late for himself, Bree, and those he’s vowed to protect.

Lion Eyes debuted in the boxed set Dark and Damaged, in June 2015, then released on its own in print, e-book, and audio in late July 2015.

Seamus is an uncollared shifter from Kendrick’s secret compound. He is doing his duty of protecting his assigned shifter after the destruction of the compound, until he finds himself in the middle of a crime he doesn’t remember committing. This makes him think that he may be going feral. He is running for his life when he finds himself in Bree’s truck getting her to help him escape whoever is chasing him.

Lion Eyes has Bree and Seamus working to try and prove he is not going feral while keeping his charge safe. I loved Seamus’s character. He just hit me in the heart and I loved him. I am not the biggest fan of the whole Shifter groupie thing, so I wasn’t the biggest fan of Bree. She improves my opinion of her some as she helps Seamus solve his problem. We do get to see some of our favorites from the Austin Shiftertown as they try to head off what could be a bad case for them if it is proven Seamus is guilty.

This was a fun novella. So much happens that it almost feels like a full-length book, and I am left feeling satisfied and content with all that happens and the information that was outlined.

I have to admit, I do not know if it was just Seamus as a character or the way he was narrated by David Brenin that has me so in love with him. He did an amazing job with his accent and character. I wasn’t pleased that I had a narrator switch, and it took me a bit to get into his voice, but I really enjoyed the way he made the characters really “pop”.