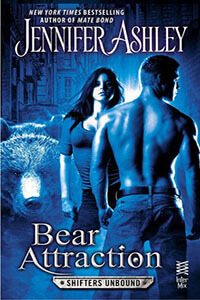 As the military liaison between the human Shifter Bureau and Shiftertown, Walker is often stuck trying to appease both sides—and angering both. So when bear-Shifter Rebecca is captured taking a run in a restricted area, Walker comes up with a compromise: if Rebecca helps him find a missing woman—thought to have been abducted by a Shifter—she won’t be charged and executed.

As a bear used to roaming for miles, Rebecca hates being confined, distrusts anything involving humans, and—worst of all—the strong and handsome Walker starts triggering her mating need. They have no choice but to work together but both Walker and Rebecca find it hard not to mix business with pleasure…

I was excited to see Walker as the hero for this novella. We’ve seen him in previous books and he’s really proven that he is fair when it comes to Shifters. He still works for the Shifter Bureau but is much more neutral. Even after being held hostage at the bear’s house near the beginning of the series. This was when Rebecca and Walker first met, and she started right out throwing her weight around with him. She’s rebellious and when Walker catches her running on protected land, she has hard time keeping herself from being executed. She doesn’t seem to have the respect for Walker’s authority. She’d rather rattle his senses than admit she was doing wrong. Having the two work together on a case was fun. I really like this couple together. I enjoy Rebecca’s stubborn attitude as it stems some fun interactions between her and Walker.

It was surprising to me that such a big revelation happens at the end of Bear Attraction where it is a novella and normally the bigger events are saved for the full length novels. I’m glad this one was in audio so I didn’t miss anything! This is a whole new can of worms that has been opened with a lot of new players. And Dylan. Just how is he involved and what is he up to?

Again, I’m so glad this was in audio. I tend to skip novellas in my audio binges when they are not in audio as well. I think this would have been a bad one for me to miss. A lot happens and Walker and Rebecca get together. Let’s see how Walker gets along living with a house full of bears!