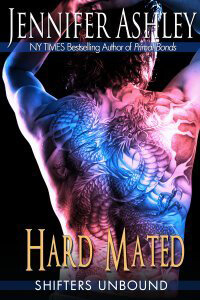 A short novel of the Shifters Unbound series. Spike, a wildcat Shifter and the champion fighter of Shiftertown, is stunned when Myka, the best friend of a dying human woman, announces that Spike has fathered a cub. What's more, the mother is giving the boy to Spike to protect and raise.

Myka, who'd been raised by an abusive stepfather, is not sure that a wild fighter named Spike is the best man to bring up the cute little jaguar cub. She goes to Shiftertown to check out Spike, and finds that the man behind the name is a lonely Shifter who's lost most of his family and is a fierce caretaker to those he has left.

Spike is torn between the cub and his duties as tracker to the Shiftertown leader, and begs Myka, the only person who understands, to help him. He starts to like the sassy Myka, a horse trainer who's not afraid of working with animals, even if they're wildcats who turn into humans.

When Spike's job puts his cub and Myka in danger, Spike is forced to choose between those to whom he's pledged his loyalty and his need to protect the woman and cub he's come to love.

I’m not sure how this novella got overlooked when writing my reviews as it was one of my favorites!

Spike is one of the tough trackers for the Shiftertown. He is on his own and his life is tracking and fighting at the fight clubs. When he is called to a dying woman’s bedside he gets the surprise of a lifetime. He’s a daddy! He instantly goes into protective mode and accepts that cub into his life. Myka, the cub’s mother’s best friend is leery of Spike’s ability to be a father, so she decides to watch him herself. This proves convenient when Spike’s duties interfere with fatherhood. Spike comes to rely on Myka to help him organize life being a single dad.

Of course, with all the time together, Myka and Spike are bound to come together. I love Spike as a dad, and the romance growing between him and Myka was so sweet. I had big smiles at the end knowing Spike was now a family man and no longer without family and on his own.

I loved this couple. His fear gripped me when Myka and the cub were in danger. Spike is not going to let his new life be torn apart quite so easily. Hard Mated really pulled at me and I got really invested in their story. Spike somehow became a favorite for me and his HEA was amazing. This was definitely one of the best novellas of the series!

One thing I’m going to say about the books so far. Tattoos are a BIG deal. The author spends a lot of time describing the tattoos of each of the characters. I felt like we got way more time spent on them than was necessary. That has been my only gripe so far, and I only acknowledge it here because Spike has SO many!

Review ~ A Kiss Before Doomsday by Laurence MacNaughton @LMacNaughton