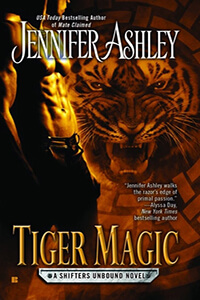 He was once a captive, but his urges were never caged. Now he’ll release them on a beautiful stranger whose own secret desires are longing to be sated…

He doesn’t have a name. He doesn’t have a clan. The humans who held him prisoner for forty years have taken them away. He knew nothing but captivity until nearly a year ago, when he was released into the light. Now Tiger lives in the Austin Shiftertown, where he struggles to belong and searches for an identity.

Carly Randal thinks her fabulous life is complete—until her car breaks down on the side of the road, and a wild-looking Shifter is the only one to help her. Tiger takes one look at Carly and knows instantly—she will be his mate. As Carly is drawn into his Shifter world, she risks everything she has for that forbidden something she still wants: passionate love.

Tiger, and yep, that’s his name, is an unknown. He’s not completely accepted, or should I say trusted, by those around him. Tiger feels this and feels separated from everyone with the exception of a select few he feels close to.

When he comes across Carly, I was not surprised by his instant knowledge of her as his mate. Nor was I surprised by how he acts around Carly. He’s so new to everything, including finding his mate, he’s just running on instincts. I expected that of him.

Carly finds herself in some pretty crappy situations right off the bat. I think that is what left her so open and willing to Tiger’s shifter status. She fell for Tiger pretty hard and fast. I wondered if maybe it was a little rebound infatuation there for her. That made me worry for Tiger. But she proves herself through their trials and I settled into her as Tiger’s mate.

I tried not to be too picky, or hard on Carly’s character. I just didn’t feel she was right for Tiger. Maybe I was a little bit protective of him. She does bring him happiness and possibly even more by the end, so I guess she is here to stay. I wish I could put more of a reason to why I’m not her biggest fan.

We get some exciting moments as Tiger’s life, and those around him come into danger. People want to know more about him and they are determined to have him caged and studied again. I enjoyed the chase and piecing together the who and why of the actions of these people.

The audio, as usual was amazing for me. Tiger was a hard voice I think, where even his human side is not really completely human. I absolutely love listening to Cris Dukehart narrate this series.