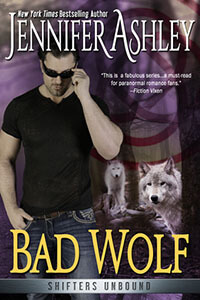 Wolf Shifter Broderick is stuck looking after his three younger brothers and a Collar-less Shifter who is driving him crazy, but he’s putting up with it for Joanne, the human woman he, for some reason, wants to impress. Joanne Greene, while grateful to Broderick for rescuing her sister, doesn’t know what to make of him. She’s been a loner most of her life, better able to relate to computers and coding than to people, until she’s drawn into the world of the Shifters.

Broderick is everything Joanne is not—a fighter and a tracker, from a rough-and-tumble family, better at working with his hands than understanding the netherworld of Joanne’s computer programmer life. Broderick is also extremely protective, wanting to draw her under his care as he does everyone else.

When Broderick is captured, mistaken for a Guardian, it’s Joanne who figures out that hackers are after the Guardian Network, the database that holds the deep secrets of Shifters past and present. Strangely, Broderick now holds the key to stopping the deadly danger of the network's breach, and Joanne with her coding skills is the only one who can help him.

After the previous few books, Broderick was not really a favorite shifter of mine. His role in taking in Joanne and her family, problems and all was very noble of him. I liked that, but still he was a bit brash for me. However, he started to win me over with his feelings for Joanne and how confused he was. He is responsible for keeping his family safe and now that includes a couple of humans.

Broderick and Joanne’s story is full of danger and surprises. Joanne becomes very important to the Shifters with her coding skills while we learn some truly interesting information about Broderick. I was intrigued by Broderick’s revelations and how they are going to relate to the Shifter world.

Broderick finding his way into realizing Joanne is his mate was fun. He was resistant, but there was so much pull. Joanne was confused by the signals she was getting from Broderick but I think she knew what she wanted.

Bad Wolf was an exciting, adrenaline filled novella with lots of surprises and even the beginning of a story arc I think. I learned to really like Broderick’s character and I loved Joanne. I had a great time with this book. I don’t like to compare, but I really do prefer Justine Eyre doing the narration, so this one took a little bit of getting used to. It did not take away from my love of the story though.