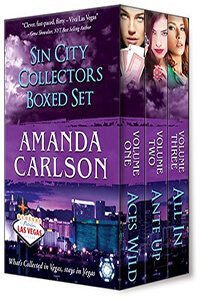 Welcome to Vegas. Home of the Sin City Collectors. The job description is easy: Bring the offending supernatural in to the Boss and don't ask any questions.

*The characters in these 3 installments interact on the page to make for one fun novel!*

ACES WILD, Vol. 1
Nevada Hamilton has learned a few things since becoming a Sin City Collector, and staying away from vampires is one of them. After botching her first Collection, she hasn't been assigned to another one since. But when she receives her next playing card, she's in for a surprise. Not only is a vampire her next target, but they've paired her up to make sure she gets the job done right.

Being a hellhound isn't enough to protect Jake Troubadour from Nevada Hamilton, no matter how thick his skin is. Finding out he has to work with the beautiful dhampir, after not seeing her for three years, is a low blow--but Jake is a professional. He takes his Collections as seriously as he does running his bar. He'll do whatever it takes to get the job done.

ANTE UP, Vol. 2
Diesel Jones is a shifter with moon issues. His dream of becoming a Sin City Collector has lingered in the shadows because of his inability to control himself. But when Louie Fiore decides to test his merit, Diesel jumps at the chance. When he finds he has to come up against an incubus, painful issues from the past resurface and he only has one thing on his mind--kill.

Sofia Cabrera is the new witch in town, and she's more than anyone bargained for. She finds herself drawn to Diesel, the sexy shifter, the first moment she lays eyes on him. When she finds herself the target of an organization of incubi, Diesel comes to her aid unexpectedly and they end up fighting the threat together.

ALL IN, Vol. 3
Ginger Elliot is a succubus on the run. She's in danger of being Collected, but her first priority is to find her brother. Even though she operates the biggest spy network in the supernatural world, it may not be enough to free her from the crimes she's been accused of committing. But keeping her deteriorating condition from the sexy shifter who's accompanying her is getting trickier by the hour.

Luke Jones is on a mission to save the succubus he's fallen for--not only from her brother--but from herself. The two have been on the incubus's trail for weeks and finally have him backed into a corner. Luke knows Ginger is in trouble, but he has no idea how to save her.

The Sin City Collectors are a group located in Las Vegas who pretty much patrol the supernatural. This collectors set includes the 3 stories written by Amanda Carlson.

Nevada Hamilton is a Dhampir being sent on a vampire case. Nevada’s last vampire case did not go so well so she’s not overly anxious to try this one. She is especially leery when she does not know the reaction between a Dhampir and a vampire. She’s not too knowledgeable about her species.

Apparently her bosses are not the most confident on this job either as they actually assign her a partner, something that is never done. Nevada is furious. Then things get even worse for her when she sees she’s been paired with Jake Troubadour. Nevada and Jake have a history. One she is deeply angry about and Jake is pretty clueless. He’s not sure what happened between them 3 years ago, but Nevada likes to kick up a hissy fit and throw verbal daggers at him all the time. You really feel sorry for the guy.

The two go on this hunt, things end up getting hot, only for Nevada to totally freak out about what they were doing. Like a totally different person. It’s not until the enemy’s game goes into motion that we find out the answers about Nevada’s strange episodes. The ending leaves us with some answered questions and a few surprises. There are things we find out about Nevada and being a dhampir that I’m so glad come out. I was seriously disliking her immature attitude. It was HER job, and the things that happened between her and Jake were HIS fault. It was pretty annoying. Jake I loved. Just one of those good guys that is always there to help. Definitely my favorite character.

In Ante Up we focus on Diesel who we met briefly in Aces Wild. He is a shifter working at Jake’s bar who has serious issues when the moon rises. It normally takes his brother to try and keep him calm. This one thing is what is keeping him from becoming a Collector. So when Louie comes to him with a case, likely to test him, Diesel jumps on it.

I am going to say here. I think Louie is like a foreseer or something because of the matches he makes. Diesel has major history with incubi, and what does he send Diesel after? You got it, an incubi. To make it worse, the moon is coming soon and Diesel needs this job done before his bad half takes over.

Sophia is also a character we met in Aces Wild. She’s a witch and ever since she laid eyes on Diesel, she’s been hanging around the bar trying to get as much time with him as she can. It is driving Nevada crazy but no matter what verbal crap Nev gives her, Sophia sticks around. Nev can be pretty brutal.

With a crazy set of circumstances, Sophia ends up in the middle of Diesel’s job. A friend of Sophia’s appears and could possibly hold the keys to the information Diesel needs. Ginger really isn’t the type of person who Diesel or his brother Luke need to be dealing with, but they help get Sophia out of a serious mess. The gang, including Nev and Jake, all come together to hunt down these incubi. They are kind of playing off the game plan as the group itself is not Diesel’s job, but he plans on dealing with that once Sophia is safe.

I thought the storyline was a lot of fun. The characters all become pretty fleshed out and the action was fun. I was not a big fan of the insta-love between Diesel and Sophia, but it is really a big part of the story. The end, is more like the beginning of the next book. Not really a cliffhanger, but more of a lead-in. I enjoyed the ride.

In the aftermath of Ante Up, Ginger leaves with Luke to find her brother. He is an incubi that was part of the group broken up in Ante Up. Ginger’s hope is to get her brother to realize what a mistake it was and to come home to be the good little incubi she thinks he needs to be. Due to arrangements made with Louie and the Collectors, Luke is Ginger’s escort. She’s on a timeline before she needs to turn herself in, so it is a race against time to get the brother found.

This book focuses primarily on the main characters with very little time involving the previous characters. Ginger knows that Luke and his family despise incubi, so she is trying her best to hide that side of herself. Two problems with that situation. The first being, it is making her too weak, and second, Luke has already fallen for her. It takes him a bit to realize it, but it was inevitable, right? He knows basically right away that his feelings are not due to her powers, but she is not chancing in and does not want him to hate her in the end.

I think this story was much shorter than the others. The main plot line of finding the brother wasn’t all that interesting for me. What kept me reading was the relationship growth between Ginger and Luke. Luke has probably been one of my favorite characters since Ante Up so it was fun to see his sense of humor and personality in All In. I think all of the stories wrapped up well and the Sin City Collectors have a few people they need to deal with.