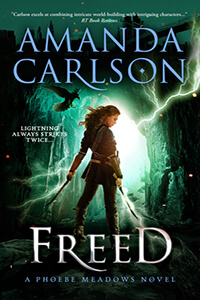 Phoebe Meadows has one thing on her mind: Free her mother.

For the last month, Phoebe has been training in the Valkyrie stronghold readying for battle. But when she stumbles into a secluded valley after a day of grueling practice, she’s given a dire prediction. Phoebe must leave the stronghold immediately with the aid of the giant, Junnal, to rescue her mother from the dark elves. If Phoebe fails, Leela will be transported to a place that can no longer be reached.

Leaving Fen behind threatens to undo her, but Phoebe stays true to the mission. Along the way, she allies with the god Baldur and an old white elf mage. Together, they storm the realm, and with the help of an angry wolf and her Valkyrie sisters, they just might stand a chance to free the valiant shieldmaiden.

But Phoebe soon learns that in order to save her mother, she might lose something too precious to sacrifice…

Phoebe Meadows had a lot of revelations thrown at her in STRUCK. FREED takes place a month later. After her previous adventures, she’s getting accustomed to her new world and has been preparing with her sister Valkries for the rescue of her mother. Finding her weapon and controlling her powers are proving to be very difficult for Phoebe. It is hard when you have a power and you are able to release it, but getting the control down is the kicker.

Not all of the Valkries are completely accepting and Phoebe finds that she has to prove herself more than once. I think that may have been why she did give in and go off on her own. She is sure that this will be the last straw for Fen, but the urgency leaves her no choice. She does have a faithful giant at her side and some wonderful tricks to maneuver through the stronghold of the dark elves.

FREED takes you through tunnel after tunnel of dangerous encounters with the dark elves that keep you fearing for Phoebe’s safety. There were so many levels to the stronghold, I am completely baffled that Phoebe was able to even locate where they were keeping Leela. Of course she had the help of her new friends, and thankfully their ingenious tricks.

Along the way, we are introduced to a few new characters that I hope are going to stick with us throughout the series. The characters played significant parts in combating the dark elves and helping Phoebe release her mother, but each individual character has a surprise. There is much more to each of these new friends than meets the eye. Baldur was a special favorite of mine. His attitude was just so whimsical in the face of the danger they were dealing with.

Just when we think we are just dealing with the dark elves who have kidnapped Leela, some foes from STRUCK appear. Just when the Valkries believe they have managed their escape, they encounter these characters and escape might not be as close as they thought. I was scared of the danger the dark elves presented, but the crisis they find themselves in now could be life changing.

Along with Baldur, Thor, Sam and Fen also made appearances. I can’t help but like Sam. She is so spunky and full of energy that her antics to keep up in the midst of these supernatural figures will make you smile.

FREED was fast-paced with a dangerous situation around every corner. There were times that you were biting your nails wondering how Phoebe was going to get out of the next crisis. I really enjoyed this installment, and really hope to see more of these characters again.

Emma Wilder did a really good job with narration. It can be hard to work with books that have a lot of strange names and accents. Ms. Wilder was able to get all the parts down that I would have struggled with had I read it. I would definitely listen to another narration by her.

Win a copy of book one of the Phoebe Meadows series to begin your adventure!