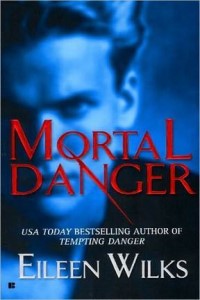 Former cop Lily Yu has her sister's wedding to attend, a missing magical staff to find, and now must deal with her grandmother's decision to return to the old country. Lily could turn to the man she's involved with for advice, but for all the passion that flares between them, she doesn't really know Rule Turner--she's just bound to him for life. Rule happens to be a werewolf, and Lily wonders just how far she can trust him.

Mortal Danger, book two in the World of the Lupi series by Eileen Wilks was full of action and adventure!

Lily Yu is going through a lot of changes since book one. She’s working for the special federal force in search of a dangerous, missing staff while adjusting to life as the mate of a lupi. She seems so sensible to me. She’s trying to take this mate thing as slow and really get to know Rule. She doesn’t want him taking over her life and independence. It’s not that she doesn’t have feelings for him, or that she’s not attracted to him. Lily just wants to make sure she knows this person who wants her moving in with him. I totally respect her character for that.

Mortal Danger takes place on two planes, and how that works totally kept me on my toes wondering how it was all going to work out. Lily is literally pulled apart here and while I was reading, I had a hard time picturing what was happening. It was a bit confusing to me, but by the end, thought the whole experience was really brilliantly done. There is somewhat of a loss, and I’m curious to see how that is going to affect Lily and Rule.

We also gain some characters that I’m excited to learn more about. I was left with an idea of whether these new characters were going to be good or on the bad side, but I won’t know for sure until hopefully the next book. They have the potential to bring a lot of fun to upcoming books.

I’m really enjoying this buddy read and I’m excited to move on to book three. Our overall arc with the staff is still open and I am interested to see how these new characters are going to play a part. Mortal Danger left Lily and Rule in a cozier place and I’m also anxious to see where these two end up!