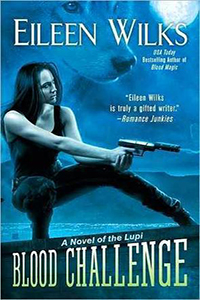 Ex-cop Lily Yu and werewolf Rule Turner's engagement announcement is stirring up ugly passions in the Humans First camp. There's hate mail, followed by death threats. And when a lupus in Tennessee goes on a killing spree, Lily realizes that it's only the opening skirmish in an all-out war.

Blood Challenge by Eileen Wilks has Rule and Lily’s relationship as a major issue all over the country. But the one we don’t speak of has other plans for the two-natured and Gifted.

At first I thought it was the human group that was after the shifters and Gifted but Nokolai soon figures out there is more at play than just a hate group. Blood Challenge was exciting as it seemed like we were seeing new stuff happening all the time. We also had an incident that could take Lily a long time to heal from. This was action packed and a challenge to everyone’s skills. There are new characters introduced that are going to make a big impact to the storyline. Also a big impact to a certain Nokolai character and I’m so happy for this special thing to happen to him!

This book left off with some pretty amazing developments and I can hardly wait to jump into the next one. Things are going to change drastically and the Lady is going to play a big part. I’m also curious to what the one we cannot name is going to do with all these new developments. This was definitely a great, interesting read. I was entranced and totally into this story.