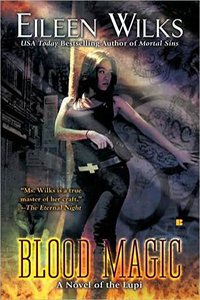 Lily Yu and Lupi prince Rule Turner have a bigger problem than their families not accepting their impending human/werewolf mixed marriage. A powerful ancient nemesis of Lily's grandmother has come to San Diego to turn the city into a feeding ground.

In the 6th book in the World of the Lupi series by Eileen Wilks, we are treated to a new evil creature. Blood Magic reveals a lot of things about Lily and her Grandmother. Dragons play a big part in this book. I’ve been wanting to see more of them for awhile and we get treated to a lot of the mysterious Sam.

Lily and Rule are back in San Diego. They are dealing with the ramifications of their engagement when this new evil strikes against them. Right at Clanhome. This is Lily’s perfect excuse to put off wedding plans and that kind of rubs Rule the wrong way. Not that he isn’t totally invested in solving this case, just that he’s feeling a little hurt and maybe a tad jealous. These feelings are confusing him.

Having some of my main characters on the chopping block was intense. I’ve grown pretty protective of Cynna, so I didn’t like all the stress she’s put under. Cullen’s predicament is also dicey. It was interesting to see how connected behind the scenes he’s been with Grandmother and Sam.

This world that Eileen Wilks has built is always bringing me new and interesting things. We continue to learn new things about our characters and the world continues to grow. At times I do feel a little like the books were written for someone smarter than me. I’m using my Kindle’s dictionary a lot more! This world is just so big I find it hard to take it all in sometimes.

The characters are becoming very important to me as the series goes on and I find myself wanting to just forget everything else I have to read and binge this series. It’s hard with so much going on in this world to just take it sips at a time! I’m really excited for Rule and Lily’s wedding, that is definitely going to be interesting!