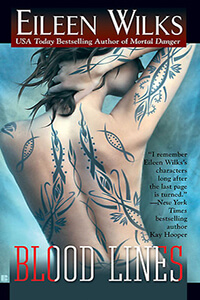 FBI agent Cynna Weaver teams up with sorcerer Cullen Seabourne to help identify elected officials who have accepted demonic pacts. But the passion simmering between them-and their investigation-spiral out of control when an ancient prophecy is fulfilled.

In Blood Lines, book 3 of the World of the Lupi series by Eileen Wilks we see our characters in Washington, DC. Although our synopsis mainly focuses on Cynna and Cullen, I believe this book really encompassed all the characters. Maybe even Lily and Rule more so. So I guess the synopsis is a little misleading.

There are demons suddenly appearing on earth. Someone is summoning and riding them. The biggest suspect is Cynna’s former mentor. There are also huge magic waves that are hitting the world hard. All of law enforcement is out to try and figure out not only what is causing the magic waves, but how these demons are appearing and seem to be targeting the Lu Nuncios of the packs.

We are introduced to a new pack. Not a friendly pack of the Nokolai’s. Rule must navigate the lupi laws and customs while Lily, Cynna and Cullen investigate the lands of the pack. Rule ends up taking on a lot of heavy consequences and Cynna is reminded of her predicted future role.

I really enjoyed Blood Lines. The way we had multiple things going on that had everyone running around trying to piece together kept me enthralled worrying about what was going to happen next. There are some interesting surprises and I’m left wondering how they are going to play out in the future installments. After a great action scene we see Lily and Rule left with a little obligation. Also, I can’t wait to see how Cynna is going to react when she finally accepts what is happening to her.

All this and I haven’t even mentioned the side characters. There is a lot to Blood Lines and you don’t want to blink because you may miss something. This book is action packed and there is little down time for our characters. The excitement of the series continues to build and I’m really becoming invested in these characters. It will be a lot of fun to get together with the book club to discuss this one!