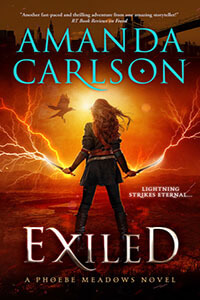 Upon entering Asgard, Phoebe discovers new allies in a half-brother she’s never met as well as an oracle who is in possession of valuable information. A little added help couldn’t have come at a better time, because when Phoebe is tossed into an unknown realm, she’s only armed with Gundren, a jewel, and her wits.

EXILED is book three in the Phoebe Meadows series. In this installment, the group travels to Asgard for Phoebe and Fen’s trial for the death of Baldur. The group has a plan, and as long as things don’t go too sideways crazy, Phoebe and Fen will come out of this alive!

This is Phoebe’s opportunity to meet family, especially her dad and it kind of sucked that it was under these circumstances. However, she does not have much time to contemplate it as hers and Fens trials come right up the next day. They will be dealing with Baldur’s grieved mother Frig who is not going to let them away with anything. She is out for blood and is determined that by releasing Baldur from his prison, Phoebe is at fault for killing him.

As expected, the pair get sent to Helhim where they must complete their plan to be exonerated of their crimes. Hel does not make it easy on them, but I felt like she was a little easier than I expected. I mean, she was planning to kill them, but I felt she was bored with it all and didn’t really have a lot of fierce hatred behind her driving her to kill them.

Phoebe finds herself with a power that definitely makes her task easier, but also loses her Fen’s help. But Phoebe is a really strong, willful character and manages quite well using her planning skills.

As with the preceeding books, EXILED is fast paced and full of tense moments wondering if someone is going to die. I found that I really enjoyed Hel’s character and even felt a tad sorry for her. As usual I felt like I was running at break neck speed and I even turned the speed up on my audiobook player because things were moving so fast.

EXILED was a lot of fun with all the characters I’ve enjoyed so far. I’m really glad Sam got to go to Asgard and I’m dying to know what is going on with her now that she’s there! There is another book in this series, right? Or a spin-off? I haven’t heard anything, but I have to know what happens to Sam! She is definitely a favorite character! If it wasn’t for the Sam stuff I would pretty much say that this was a trilogy and at its end. I hope we don’t get left hanging.