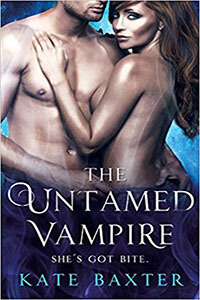 Chelle is not your typical vampire. Turned not with a bite but an age-old magic, she's the only one of her kind and more powerful than most. Still adjusting to her endless thirst and lethal fangs, she's desperate to discover what sets her apart. When she encounters a brutally virile alpha werewolf, she soon learns that she's not immune to the mating call and her own primal longing

The leader of the ancient Forkbeard pack, Gunnar is stunned by Chelle's lush beauty. The wild wolf inside him howls for her, but unions between vampire and werewolf are strictly taboo even if their clans weren't on the verge of war. Desire has never been so dangerous but, as a malevolent new power rises, Chelle and Gunnar face an even more frightening threat. Together, they might find a way to save their clans. But can they claim their passion, in The Untamed Vampire by Kate Baxter.

I am loving the characters in this series. Each book makes me fall a little in love with each main couple. The Untamed Vampire features Chelle and Gunnar who get struck with their mating or tether (depends on who you ask) at first sight. The unfortunate part is that bond hits them while Chelle is in the pack’s home trying to steal a part of a key that could give her answers to what she is.

Chelle is not the crazed vampire that the last book made her sound to be. She really is level-headed. She could have grown that way since The Dark Vampire, gotten more control over herself. But Chelle still does not trust herself. She is driven by a need to know how she was created and what abilities she is likely to have. She already has some power that she hasn’t told anyone about for fear they will all see her as different and be afraid of her. She needs to get all 3 pieces of this key so she can open Set’s Chest and hopefully get some answers.

Gunnar is blown away when he gets hit with the mate bond while catching a robber in their relic room. He is so stunned and Chelle is so fast, she gets away. But not with her prize. Gunnar has to hide his bond with Chelle as it would be against pack rules to mate with anyone other than another wolf. He is also dealing with a second who is determined to convince Gunnar they should ally themselves with the berserkers and Gregor. Gunnar does not feel like he have to align himself with anyone. But he is being pushed. The decision not to align with Gregor has his Aren vexed and Chelle can see in his mind that he wants to take over the pack. That leaves Gunnar with tension within his pack while he tries to deal with his mate bond with Chelle.

We get an answer to what Vanessa is, but that is about all we get for answers on open threads. There are a few lines that are being worked. Saeed is one of them and I see that he is the hero in the next book. Vanessa’s prediction has more than one person actively seeking this red-headed woman. Hopefully we will learn more about this woman in The Lost Vampire.

I really enjoyed Chelle and Gunnar. Gunnar is so determined to make the made bond work, while Chelle is trying not to get too close so the tether won’t get too strong. At first she tries holding back from Gunnar, but he is just too much for her to give up. The mating or tethering may have happened on sight of each other, but the romance that brings them to love each other doesn’t come as easy.

This series has been great for making sure there is some good conflict. In establishing his role as King of the Vampires, Mikhael is trying to build up his alliance and get some vampires made from the covens. We have a lot of characters on the fence for this, and Gunnar does not come right out and offer his allegiance, which kind of worries Mikhail.

I can’t wait for the next book. The search for the red-haired woman will have berserkers, mages and vampires racing each other to find her. I’m dying to find out why.