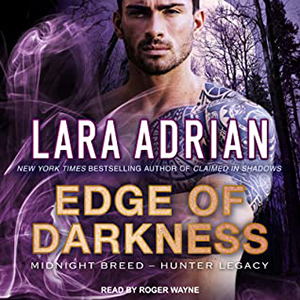 As a survivor of the horrific Hunter program, Breed vampire and former assassin Knox is a solitary man, closed off to the pain of love—and loss. A loner by choice, Knox deals in death and dark justice, expecting nothing in return. Until one snowy night he drifts into a remote town in northern Maine, where a determined beauty enlists his lethal assistance, tempting not only his hunger, but his wounded heart as well.

Lenora Calhoun has lived in tiny Parrish Falls all her life. Owner of the local diner that’s been in her family for generations, Leni’s as stalwart and stubborn as the tall pines that surround her. That unshakable resolve doesn’t sit well with everyone, least of all the most powerful family in the logging town. Leni’s been the target of their animosity for years, but with their escalating threats now putting an innocent child’s safety at risk, she takes a desperate chance on a dangerous stranger—a man who is something more than human. Knox’s deadly skills and turbulent gaze should be warning enough for Leni to guard her heart, yet she cannot deny the yearning he stirs in her blood. For the merciless Breed male is the only man she can trust in a town full of secrets, and where taking a stand could rip away everything she holds dear.

While this novel is Book 3 in the Hunter Legacy series, each story in this Midnight Breed spin-off series can be read as a complete standalone with HEA and no cliffhangers.

As it says in the blurb, the Hunter Legacy books can be read as standalone. However, I think that some understanding of the Midnight Breed world and what happened to the Hunters would be helpful when reading these. You can find out more about the Hunters in the first half of the Midnight Breed series, before the books jump ahead twenty years. Because the Hunters are not really part of an organized group, with an ongoing arc, they do make great standalones. I just think the impact of what Hunters went through makes you fully understand what they are going through when trying to fit into society.

Edge of Darkness is about Knox, who is currently wandering around the country, unsure of where to settle. He has had an experience outside of the Hunter program that has caused him to really withdraw and put a lot of blame and guilt on himself. Then he gets stuck in Parrish Falls and despite his instincts telling him to get in the nearest truck and leave, he is drawn to Lenora and her plight. He finds himself getting more and more involved in her problems. Despite his obvious attraction to her, he is determined that she leave Parrish Falls and be put in the safe arms of the Order. But can he let her go? Will she go willingly?

I really enjoyed the action and danger Knox and Lenora faced. The Parrish family is into a lot of bad stuff, but are protected by the town. I loved seeing a Hunter try and navigate these feelings he was having for Lenora. It was kind of like he focused on the protectiveness part because he could understand the violence that would be needed to deal with the Parrish family. Focusing on that kept him from dwelling on the strange emotions that were running through him about Lenora and her nephew.

Edge of Darkness was a fast-paced, action-packed adventure. I love seeing these Hunters adjust to society and fall in love. Roger Wayne narrated and I think he did a great job. You could feel the internal struggle Knox was going through. I can’t wait to see who is next.