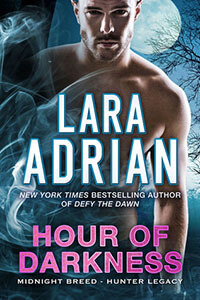 Born and raised as an assassin in the notorious Hunter program, Breed vampire Cain has since put his specialized skills to use as a mercenary willing to clean up any problem for a price. Or so he thought. After a job in Las Vegas strains even his dubious code of honor, Cain pulls up stakes and lands in Miami for a much-needed break. All he wants is time away to clear his head and regroup, but then a beautiful young woman is nearly killed in front of his eyes and the ruthless former Hunter becomes the only thing standing between her and a sniper’s bullet.

Marina Moretskova is no stranger to dangerous men. As the niece of a Russian organized crime boss, she’s grown up around killers and criminals. But her uncle wants out now, and he’s enlisted Marina’s help in buying his freedom by delivering valuable intel to a secret contact in exchange for protection. Not even Marina’s bodyguards are aware of her mission, so when an attempt on her life is averted by a handsome, steely-eyed vampire, as grateful as she is for Cain’s intervention, the last thing she needs is the shrewd Breed male nosing around for answers. Cain’s cold, haunted gaze and merciless abilities attest to his brutal nature, yet the rough, solitary Hunter stirs a powerful longing in Marina—a darkly seductive hunger she can neither afford nor resist. With a target on her back and covert enemies closing in from all sides, trust is a risk that can prove deadly . . . and the safest shelter she may find is in the arms of the most lethal man she’ll ever know.

Each book in the Hunter Legacy series is a standalone vampire romance with a complete storyline and HEA.

The Hour of Darkness by Lara Adrian is book two in the Hunter Legacy series. Each of these hunters from the program disbanded in the Midnight Breed series were left to strike out on their own to live their lives in the world. This is difficult for those hunters as they were raised all their lives until 20 years ago to be assassins.

Cain was in book one as an employee of the villian, but left in the end when things came to a climax. He went in search of peace as I think he was tired of the violence that still plagued his life. He is wandering, and staying in a hotel in Florida. Through his power, he meets Marina and finds himself protecting a Breedmate. He returns to a Darkhaven he left years ago with brothers of the program. I didn’t see a lot of the assassin traits left in the brothers. I know they must be there, but these guys seemed like genuine, great guys. I’m wondering if we get stories on all of them.

Helping protect Marina sinks them both into some dangerous situations. We get explosions and lots of action. The romance is steamy too, and you have that whole holding back on the blood thing because of Marina being a Breedmate. The couple endure their differences with Cain of course trying to stay out of a relationship. However, things get seriously bad and he has to face what his heart has been telling him, but it could definitely be too late. I almost cried. I’m not overly emotional, and I knew I had to have an HEA, so the really hard part had light at the end of the tunnel. But it was heart wrenching.

I really enjoyed this mix of action, suspense and romance. The lives of the hunters are interesting knowing how they grew up. It’s interesting to see what they were able to do with their lives after all they had been through.

The narration was good for the male POV parts, but I had a really hard time with Roger Wayne’s female Russian accent. I eventually got over it, but it was an adjustment for me. There were also parts that I felt like could have had more fire to them, like the action scenes. Overall it was a good performance, there were just a couple of little bits that bothered me.