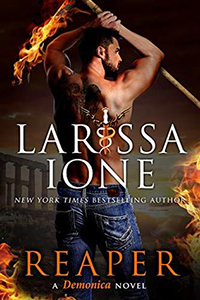 He is the Keeper of Souls. Judge, jury, and executioner. He is death personified.

He is the Grim Reaper.

A fallen angel who commands the respect of both Heaven and Hell, Azagoth has presided over his own underworld realm for thousands of years. As the overlord of evil souls, he maintains balance crucial to the existence of life on Earth and beyond. But as all the realms gear up for the prophesied End of Days, the ties that bind him to Sheoul-gra have begun to chafe.

Now, with his beloved mate and unborn child the target of an ancient enemy, Azagoth will stop at nothing to save them, even if it means breaking blood oaths and shattering age-old alliances.

I’ve been teased by the many novellas taking us into the Demonica world the last few years and was ecstatic when I saw that we were getting a full length book in this world. I was even more excited when I saw that it was going to center around Azagoth. What I wasn’t prepared for was the emotional roller coaster this book would take me on. There were many times I had to set the book down just to absorb what Larissa Ione had done. I just couldn’t fathom what she was doing to some of my beloved characters!

Azagoth was one of those characters that was feared and kind of bad. Then he met Lilliana and his world was turned upside down. He changed, as well as all of Sheoul-gra. Things were different. Azagoth was bringing his children together and had even started a family with Lilliana. She is due to give birth any day. But there is still a war brewing. There is evil still trying to get Satan released and only Azagoth can do that. But releasing Satan will start the Apocalypse. So when pregnant Lilliana is abducted and Azagoth is faced with the choice of the life of his mate and child or releasing Satan, big changes are going to happen. You can’t trust the evil in Sheoul, so Lilliana and the baby may never be released no matter what Azagoth does. He needs to face his options and debate the consequences. What he chooses will affect the whole world. Nothing will be the same.

I was on edge and totally torn throughout this whole book. This is not a happy story. I shed more than a few tears. The world we are left with has so much potential that I’m excited to see where Larissa Ione is going to take us. I’m hoping this is a beginning, not an end. I heard somewhere that the Demonica world is going to continue with the children next. The way Reaper is left, that is definitely a possibility. I’m not even going to tell you if there is an HEA. Thinking this may be the end of the Demonica world definitely had an effect on me while reading and I don’t want to reveal anything that may affect your reading experience. This is definitely a book you’ll need to absorb and soak in. 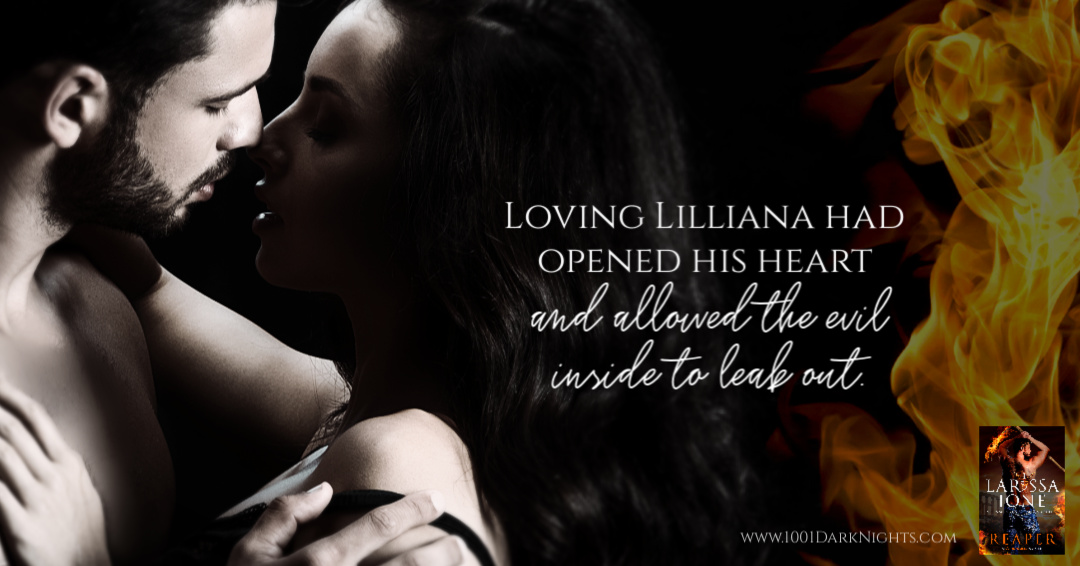 I don’t think that just reading Azagoth’s novella will be enough in the understanding of this book. Characters from the whole world are pulled in on this one and I think that to understand all of the players, you have to know their stories. I definitely recommend reading the series. It has been a long time, and I felt in some places I should have done a reread. Enough of the story was told that I remembered the character’s story, but I definitely would have benefited from rereading.

Reaper was a gut wrenching, top read of the year for me. I was blown away by the emotions and how drawn into the story and characters I was. My fingers are crossed for a continuation of this world, and hopefully fairly soon. I know there is a lot going on in Larissa Ione’s life, but I’m hoping the story is playing in her head and she’ll get time to put it to paper. The world just can’t be left like this!

Lilliana woke to someone tap dancing on her bladder.

Groaning, she rolled over and bumped into Azagoth. Pleasantly surprised that he was still in bed, she ignored her need to pee and curled up against him.

She’d missed this so much while she was gone.

“Good morning,” he murmured, his husky voice even more gravelly than usual.

“Morning.” She snuggled into his shoulder. “I’m surprised you’re not working.”

He yawned. “You wore me out last night.”

Smiling against his skin, she trailed her fingers along the hard ridges and deep valleys of his abs.

“I wanted to show you how grateful I was that you threw me a baby shower.” And she’d done it without getting too active. Eidolon couldn’t begrudge her one orgasm, right?

“Mmm.” He pressed a kiss into her hair. “You must have been very grateful.”

She slid her hand under the sheet and meandered her way to the curve of his hip. She might be a million months into her pregnancy, but her sex drive didn’t care in the least.

He hissed as her knuckles brushed his shaft. “Not complaining.”

It truly had been sweet of him to gather together the denizens of Sheoul-gra for a big celebration of food, drink, and games in the traditions of people from the human, demon, and angelic cultures. She’d suffered two more bouts of intense nausea and some cramps, but they’d passed quickly. What hadn’t passed was Azagoth’s concern.

Which was probably why he was still in bed with her.

It was cute the way he hovered. Annoying at times, but cute.

“And what are you with me?”

He gave her a rare, boyish grin, made even more playful by his mop of bedhead. “A happy monster.”

“I’m very happy about the happy.” She rubbed her eyes and yawned.

“Things are good, Lil,” he said. “I never thought much about being a partner, let alone a parent, but I want to do these things with you.” He settled his hand on her belly and smiled with wonder. “This will be my first child born without a predetermined future. He or she can be anything. Do anything.”

“Incredible, isn’t it?” She pushed up on one elbow and leaned in to kiss his chest. She’d kissed every inch of him last night. Maybe she’d lick every inch of him this morning. “And our baby will be born to parents who love each other.”

Determined to show him how much she loved him, she kissed her way lower. Her lips whispered over his nipple, but before she could taste him, a cramp wrenched her insides. She sucked in a harsh breath, her hand going to her belly.

“What is it?” Azagoth jackknifed up, his expression dark with worry. “Is it the baby?”

Fierce heat swelled beneath the surface of her skin as her abdomen tightened. “I think it might be Braxton Hicks,” she said between panting breaths.

“Cara had them.” Closing her eyes to stop the room from spinning, she eased back onto her pillow. “They’re like practice contractions.”

She didn’t remember Cara complaining about being hot and sweating buckets, though. Another cramp streaked through her, and she moaned. Cara had said they were painful, as if someone were squeezing her intestines.

This was more like someone was driving a red-hot blade through them.

No, nothing was wrong. She was being paranoid.

Azagoth rested his palm on her forehead, testing her temperature. “Are these Hicks things supposed to be like this?”

She heard the panic in his voice but not the words. Her ears were buzzing. Her head was pounding. And, suddenly, a wave of agony wrapped around her and squeezed so hard she screamed. Vaguely, she heard Azagoth call out her name as a warm gush spread between her thighs.

“Lilliana? Lilliana!” His voice droned in and out as the room began to tilt. There was shouting. More pain. Her thoughts fragmented. 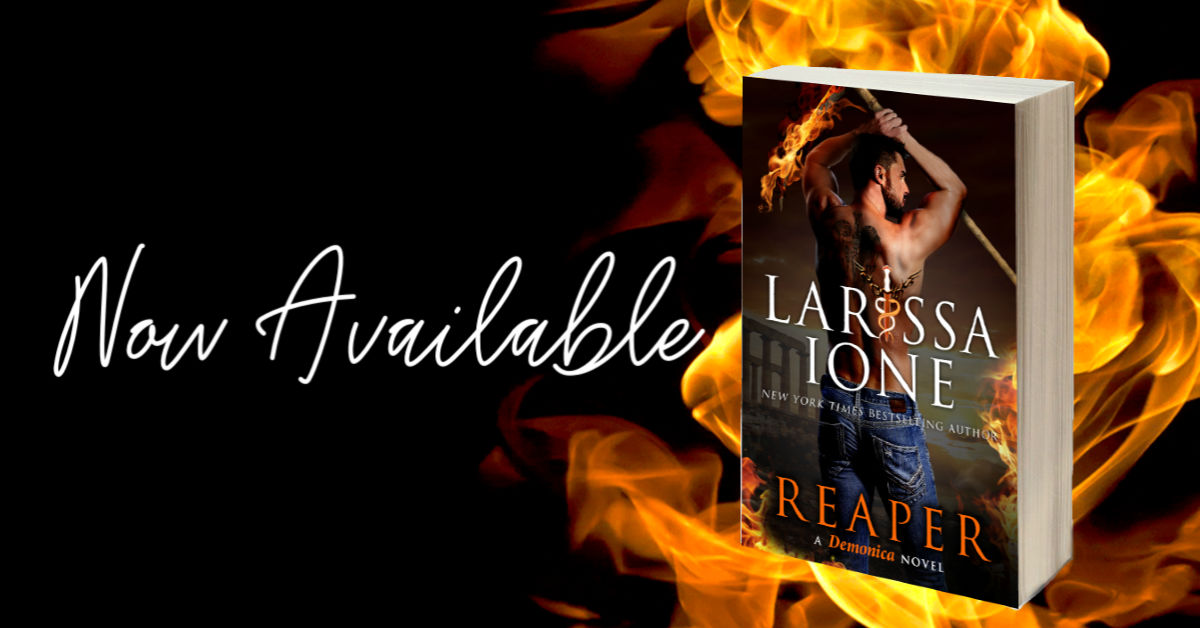 Waiting On Wednesday ~ Bond of Destiny by Larissa Ione