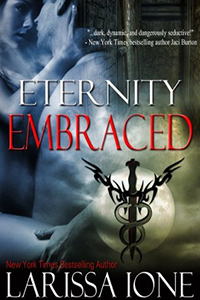 Desire...
Demon slayer Andrea Cole has always taken down the demons and vampires she hunts without mercy. But when a fellow slayer is captured and turned into a vampire by a sadistic monster, she must choose between loyalty to her family and the man she loves.

Versus Instinct...
Kaden Quinn has dedicated his life to slaying vampires, so when he is turned into one, his greatest nightmare comes to life. And when the woman he loves is thrown into a dungeon with him ― as food ― he must battle new instincts and old desires, and choose between his life, and hers.

PLEASE NOTE: This is a short novella that originally appeared in The Mammoth Book of Vampire Romance 2 and the anthology Vampires in Love. It has been expanded for its stand-alone digital release. In the Demonica timeline, it falls between book 3, Passion Unleashed, and book 4, Ecstasy Unveiled, though it can easily be read without having read the Demonica novels.

I picked up Eternity Embraced many years ago, but it was being given away in another author’s newsletter, so I ended up getting it again. If I read it way back when I first got it, it didn’t make enough of an impression on me because this didn’t read familiar to me at all. This was originally a novella released in a couple of anthologies, but it’s length made me wonder if it could even qualify as a novella. It was extremely short and you do not get enough info on the characters to make you really care. I admit, I was happy to see Tayla and Eidolon. Their role is very small though.

If you are just looking for a quick Demonica fix, this may be what you’re looking for. But it didn’t raise many emotions in me at all. I could not let a Demonica book go unread though and I am not an anthology reader so I was grateful to get this one read.