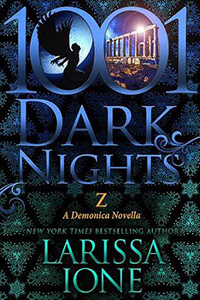 Zhubaal, fallen angel assistant to the Grim Reaper, has spent decades searching for the angel he loved and lost nearly a century ago. Not even her death can keep him from trying to find her, not when he knows she’s been given a second chance at life in a new body. But as time passes, he’s losing hope, and he wonders how much longer he can hold to the oath he swore to her so long ago…

As an emim, the wingless offspring of two fallen angels, Vex has always felt like a second-class citizen. But if she manages to secure a deal with the Grim Reaper — by any means necessary — she will have earned her place in the world. The only obstacle in the way of her plan is a sexy hardass called Z, who seems determined to thwart her at every turn. Soon it becomes clear that they have a powerful connection rooted in the past…but can any vow stand the test of time?

I look forward to a book or novella from this series, no matter who is the lead. I didn’t know a lot about Zhubaal, but because of the world, I wasn’t going to miss this. I loved Cat and Hades, but I had more interaction in previous books with Hades. Z was somewhat new.

It wasn’t that I didn’t like Z’s character, but he just seemed a bit like a whiner to me. He was so wrapped up in finding the soul of his beloved that he couldn’t see past what was right in front of him. Which was a pretty kick ass character. Vex was awesome. She had that hard ass attitude that I love with Larissa Ione’s characters.

Vex is persistent and stubborn. She has her plan and this Z is not going to ruin it. She has plans with the Grim Reaper and just wants to get on with it. Both Vex and Z are confused about what is going on between them. Vex, of course, is the sensible one and tells it like it is. Convincing Z is the hard part. You can only do so much with a man who has been obsessed with finding one certain person for centuries.

Vex is tough and can move on with her new life, with the Reaper’s agreement. Once Vex moves on, it is satisfying to watch Z reevaluate his life. That was when my feelings toward Z took on a whole new level. When he realized the centuries he wasted with his obsession and did a complete turn around, I felt like it was about time. When Z gets his head on straight, he charges forward and I loved that. Took him a little bit of soul searching but with a little coaxing, he was able to take control and be the kind of hero I like to see.

I couldn’t help but enjoy this novella. These two were awesome characters despite their newness to the series. So many characters have been introduced I feel like we could continue on for quite some time with whole new books (I wish) or even plenty more novellas. I will be right there waiting for them!