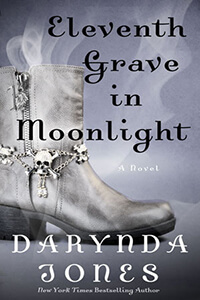 A typical day in the life of Charley Davidson involves cheating husbands, missing people, errant wives, philandering business owners, and oh yeah...demons, hell hounds, evil gods, and dead people. Lots and lots of dead people. As a part time Private Investigator and full-time Grim Reaper, Charley has to balance the good, the bad, the undead, and those who want her dead. In this eleventh installment, Charley is learning to make peace with the fact that she is a goddess with all kinds of power and that her own daughter has been born to save the world from total destruction. But the forces of hell are determined to see Charley banished forever to the darkest corners of another dimension. With the son of Satan himself as her husband and world-rocking lover, maybe Charley can find a way to have her happily ever after after all.

When you read a Charley Davidson novel, you need to be prepared for a fast-paced book. Everything happens quickly, which I would attribute to the amount of coffee our darling Charley consumes. Truly? I don’t think she sleeps.

True to previous books, Charley takes on cases to work while she also wrestles with all she is learning about herself and the world. Charley has been watching the Fosters, despite Reyes’ disapproval. He is downright adamant that she not take on this case. Charley isn’t going to let somebody tell her what to do. And with Ubie acting all strange and trying to tell her what to do too, she’s really sick of it. So what do you do when people demand you do one thing? You do the opposite.

So many things happen throughout Eleventh Grave and you have to be careful not to miss anything. The cases and investigations Charley takes on are very close to her. People she loves are in situations that can’t be ignored and in the midst of those situations she is being flooded with information on what she is truly capable of and bits of her memory are explained. She not only finds out new things she is capable of, but that that there are rules to what she can and cannot do with her powers. The problem is that she needs to learn how to use these powers effectively to help her and those she loves in times of trouble.

Despite all that circles around Charley, she somehow keeps her sense of humor, her strategic plans and her love of coffee from being affected. That is what makes Charley Davidson one of my favorite characters. She can really keep it together in most cases. Granted she somehow always finds herself in situations where you have to wonder just how she (or someone she loves) is going to survive. Those times alone keep me freaked and reading at a frantic pace.

Then there is my biggest complaint, if you want to call it a complaint. It’s the endings. They are kind of cliffhangers, or at least the last few have been. I will admit, the end of this book came around and there was some violent cursing at the book and Darynda. How can I wait after this happens. I had no idea that was coming and it is going to really throw you for a curve ball. I am so freaked out, there are no words.

Charley’s life has become really complicated and it is kind of hard to keep up. You definitely do not want to try and jump in here. So much happens in the previous books building up to what we know is going to be a big ending. This could be why we are being left in a state of panic at the end of each installment. I am beyond ready for the Trouble With Twelfth Grave. I have become so immersed in this series that sometimes my feelings overwhelm me and to me that is the sign of a great book.

To help you totally immerse in the story is the narration of Lorelei King. She takes on each character with such feeling that you flow into each character. Lorelei has just made them part of the series and I can’t imagine not listening to this series. I don’t think my head could create the voices with the skill that Lorelei King does.