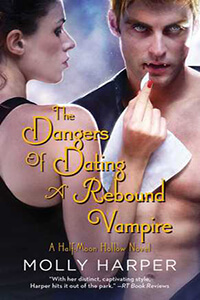 Gigi starts her first job (at Vampire Headquarters), gets over her first love, and may even fall for her first vampire!

Gigi is no longer an innocent teen. All grown up and looking for love, her family and friends worry she’ll go for the sexy, alluring vampire instead of a nice, safe human. But sexy and alluring, with a penchant for biting, could be just what Gigi wants...

In The Dangers of Dating a Rebound Vampire, we see more of Gigi. She seems to have matured and grown more. She has set her mind to where she wants to be headed. Gigi has gotten over her boyfriend and is ready to start fresh with her internship. Even if it is under Ophelia Lambert. Gigi is determined to make her life work. Unfortunately the universe has other plans. Iris always made a big deal over Gigi being with vampires, but now it seems Gigi works for the Council. Then to make it worse, there is this vampire that has been following her for ages while she was at school. Gigi finally gets the story out of Cal. Now that Gigi has met this strange vampire, and the lights spark, Cal may be questioning his sanity.

Gigi is coming into her own, and as much as Cal and Iris don’t like it, Gigi is going to go do what she wants. Even if it is with a vampire who takes some weird episodes. The last thing Iris wanted was for Gigi to fall for a vampire, but she can’t protect Gigi from everything.

There is quite a bit of mystery and for the longest time I couldn’t pull them all together. You kind of feel like they are unrelated until the crap hits the fan and everyone’s secrets are revealed. We are left with an awesome ending that opens some doors for the books to come. I’m so excited to see how a certain vampire continues her life from here.

The Dangers of Dating a Rebound Vampire was what I expected from Molly Harper. She manages to include romance and mysteries together with a ton of snark and fun. You can’t help but settle in and spend a cozy afternoon wrapped in this story. The laughs and the tension will leave you dying for more of Half-Moon Hollow.