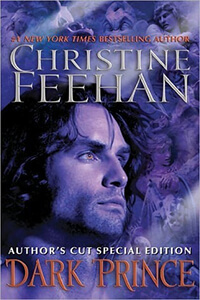 Enter the enchanting world of the Carpathians, where dark adventure, mystery, and love await, and the desires of two daring hearts unite in one irresistible passion.

A telepathic hunter of serial killers, Raven Whitney helps to catch some of the most depraved criminals. But her work keeps her from getting close to others, and has drained her body and spirit. In need of rest and rejuvenation, she embarks for a vacation far from home.

Mikhail Dubrinsky is the prince of the Carpathians, the powerful leader of a wise and secret ancient race that thrives in the night. Engulfed by despair, fearful of never finding the mate who can save him from the encroaching darkness, his soul cries out in loneliness—until the day that a beautiful voice full of light and love responds, softly soothing his
pain and yearning.

From the moment they meet, Raven and Mikhail are helpless to resist the desire that sparks between them. But just as fate unexpectedly brings these life mates together, malevolent forces threaten to destroy them and their fragile love. Yet even if they survive, how can these two lovers—Carpathian and human—build a future together? And how can Mikhail bring Raven into his dark world without extinguishing her beautiful goodness and light?

It’s only been the last year or two that I’ve picked up Christine Feehan’s books and I wanted to jump back and start at the beginning of some of her other series. The Dark series is where I decided to start. Dark Prince is 20 years old now. I listened to the author’s cut audiobook which I think is a little younger.

I don’t know if it is the age of the book, or first book syndrome but I had a really hard time with Dark Prince. I’m used to the alpha male hero. Mikhail Dubrinsky is that typical character. He is the prince of the Carpathians who has found his life mate and demonstrates all the characteristics of someone who has found a treasure and wants to protect it with his life.

No, I didn’t mind Mikhail so much. It was Raven that truly got to me. I just found her character beyond annoying. She was constantly making situations worse and the phrase “too stupid to live” repeatedly came to mind. The introduction of the Carpathians and their ways was definitely something that would take some getting used to, but I felt like Raven’s determination to cling to humanity just drove me nuts. I can see how she is going to impact the Carpathian world by bringing some humanity into their world. Her existence brings great hope to the Carpathians. There is great potential to the series because of her, but damn, she annoyed me.

I’m pretty disappointed with this read, but have hopes that in continuing the series, my feelings for the Carpathians will improve. I actually liked many of the other characters, it was just Raven that turned me off. This series is long running, so there is definitely more to it than what I got from this installment. I’ll definitely continue to the next book and hope that I get the excitement that so many die hard fans of this series enjoy.

Review ~ Burn For Me by Cynthia Eden