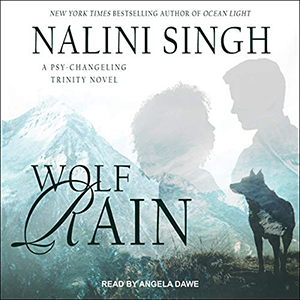 The end of Silence was supposed to create a better world for future generations. But trust is broken, and the alliance between Psy, Changeling, and human is thin. The problems that led to Silence are back in full force. Because Silence fixed nothing, just hid the problems.

This time, the Psy have to find a real answer to their problems—if one exists. Or their race will soon go extinct in a cascade of violence. The answer begins with an empath who is attuned to monsters—and who is going to charm a wolf into loving her despite his own demons.

Wolf Rain was one of my top 2019 most anticipated releases! I really love the wolves, so to be back in Snow Dancer territory was something I had been so excited for!

Alexei finds himself the rescuer of an Empath Psy. She doesn’t believe that is what she is. Memory thinks herself a monster. With a lot of work with Alexei, Sascha and the Empath colony, she slowly grows into herself. She was held prisoner for so long and as the story moves along, her character is built. Memory becomes strong and independent. I loved that she was opening up and learning so much about herself. She took such pleasure in little things and it made me look at things differently.

Alexei is going through a particularly bad patch right now and his emotions are a mixed bag. Memory wants so bad to help him. He tries to resist, even pushes her away, but then finds himself leaving her food and gifts like he was courting her. The mixed signals really confused Memory for awhile and she decides she is going to let him be the “big wolfy chicken” he’s acting like and ignore him.

We have two storylines going on that keep everyone busy. There is the threat to Memory, her captor trying to get her back, as well as a figure that has a degrading mind and is attacking the E’s. With the training Memory has been receiving from the colony, she is a major player in bringing down these two conflicts. She moves from being someone who is determined she is a monster, to someone who can actually save lives. She is an anomaly in the PsyNet and has a great purpose. It will take some work with Ivy Jane and Caleb Krychek to help Memory develop her skills.

I absolutely LOVED Alexei and Memory’s relationship. It was built with the two of them helping each other through their issues. They were both strong characters, but characters that were plagued with trauma. Both Memory and Alexei were determined to help the other deal with their problems and make their relationship possible.

I was so happy with how the story was setup and flowed. The inclusion of previous characters was so fun and brought the level of my enjoyment even higher. We didn’t get much advancement in the way of the attacks against the Trinity Accord, this story was much more focused on the degradation of the PsyNet as well as the two sources of evil that needed to be dealt with. I’m sure we’ll get back to that story line in the next book. I’m dying to know who gets the next book. The Psy-Changeling series is one of my favorites and I am always impatient for new releases. Wolf Rain is definitely placed as one of my top books in the series.

The narration for Wolf Rain was great. Angela Dawe does an amazing job as always with the vocal characteristics of the characters. I love her work with this series.

Leaning forward to grip the edge of the upper bunk, his big body far too close and the heat of him nearly a touch, he said, “Yeah? Well, I consider him prey.” His voice was hard and human, but the eyes that met Memory’s were a striking mix of amber and gray.

When he reached down one clawed hand to touch the side of her face, she didn’t jerk back. The deadly tips grazed her skin, but instead of a spike of fear, she felt that strange fluttering in her abdomen, her breath catching. He was so close she could smell the wild warmth of his scent, catch a hint of the perspiration that had dampened the hair at his temples.

Her fingers tingled, wanting to touch his skin, feel the power of all that muscle. Gripping the mattress of her bunk to still the strange urge, she held his stare until his gaze was all amber and his chest rumbled. Memory knew that, to a wolf, aggressive eye contact was a challenge, but she didn’t care.

Never again would she back down from anyone.

He snapped his teeth at her.

It made her jump in surprise. Eyes narrowed in sheer annoyance, she bared her own teeth at him. And, since he was looming over her, she lifted her hands and pushed forcefully at his hips. Her fingers brushed warm, hard abdominal muscles, her palms braced against the cloth of his sweatpants. The raw power of him hummed through her.