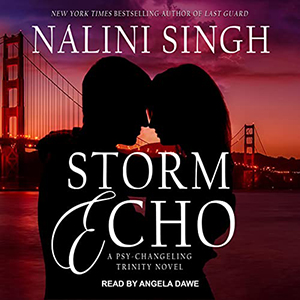 Silence has fallen. The Psy are free to feel emotion. Free to love. But Silence was never a prison for Ivan Mercant. The biggest threat to his future lies dormant in his brain—a psychic monster that wants only to feed. And now, the brutal leash he’s kept on that monster is slipping. He prepared for this day, for the end of Ivan Mercant . . . but that was before he met Lei.

As primal as she is human, this wild changeling brings color into his life, laughter to his soul. Then the dream shatters in a rain of blood, in silent bodies in the snow. Lei is gone. Vanished without a trace . . . until he meets strangely familiar eyes across a busy San Francisco street.

Soleil Bijoux Garcia is a healer who has lost everything. She exists in a world of desolate aloneness . . . till the day she finds herself face-to-face with a lethal stranger. The animal who is her other half knows this man, but her memories are tattered fragments. Sorrow and a need for vengeance are all that drive her. Her mission? To kill the alpha of the DarkRiver leopard pack.

But fate has other plans. Soon, a deadly soldier who believes himself a monster and a broken healer might be all that stand between life and death for the entire Psy race.

Storm Echo was a greatly anticipated book for me. I love this world, and it just expands with each book.

In Storm Echo, we connect with a Mercant, Ivan this time. I don’t remember much about him in previous books if he has even been included before. He is a ticking time bomb that has been building since his birth. He is a deathly assassin that helps control the monster inside of him. He seems to be resigned to his death once his internal monster has taken control of him. I felt bad for him right from the beginning and was maybe a bit frustrated at his resignation to his future.

Then he meets Soleil and she makes him feel peaceful. Soleil is a very carefree spirit. Not to say she didn’t have issues of her own that she does not really fill Ivan in on. Soleil is a very likeable character, and then there is a terrible massacre. She does what she can but eventually she almost dies.

Ivan loses track of Soleil and spends a year looking for her. She is not the same person she was before. There is a very strong connection between the two and when they finally come face to face, it is something neither can deny.

When they connect, it is in San Francisco where we get to be back in the world of the Leopards! I have really missed them. And we just don’t see them in passing, we get into their world. Absolutely loved it.

The overall arc of the Architect is wound to a close with a shocking ending. I’m really going to have to go back and refresh my memory on this character. At the end of the book is a “Revelations”, I guess like an Epilogue but with shocking information. For me, that indicated the series will continue to move on. I think there will have to be some new characters added, but I’m sure it can be done. Go Nalini!