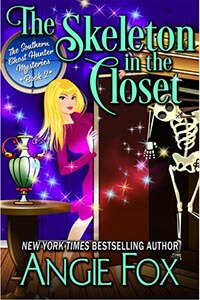 A haunted library is no place for a girl who can see ghosts, but when Verity Long stumbles on a dead body in the middle of the main reading room, she has to believe someone…even a dead someone…must have witnessed the crime.

Her ghostly sidekick Frankie warns her to stay out of it. The very alive, very handsome deputy sheriff, Ellis Wydell, inadvertently places her directly in the middle of it. And her ex-fiancé, Ellis’s brother, is back with an agenda of his own.

Undaunted, Verity presses forward, uncovering scandalous secrets, long-forgotten ghosts, and a shocking trail of clues that places her directly in the path of a killer.

The Skeleton In The Closet is the second book in the Southern Ghost Hunter Series. I found I was definitely getting more into the characters and the situations they found themselves in.

Verity Long has become much more accustomed to associating with the dead. We know that Frankie giving Verity the power seems to drain him but to solve the case of the murder in the library, the ghosts may be the only lead she has. The library being an old building, standing as far back as the civil war, there is a lot of ghostly activity for Verity to work with. Unfortunately, some of the ghosts are all in different stages. Frankie finds some fun with a group of card playing soldiers, while there are some ghosts reliving their life in the library over and over again. The worst part is the ghost in the basement that all the ghosts are afraid of. Verity cannot leave one stone unturned and approaches the frightening ghost.

With little to go on, Verity makes her way through the clues she picks up from the ghosts and people of the town. Ellis is back to help her while he tries to keep their “relationship” a secret. Especially when the ex from hell shows up trying to woe Verity back.

The antics of Frankie, and the investigative skills of Verity bring on some fun scenes. There is also the little undercurrents and suspicious actions of the townspeople, who by the way, still treat Verity badly. I felt Verity was a lot more confident and interested in the skills she has to help solve mysteries. She was still intimidated and scared in certain positions, but she was definitely stronger. Instead of Frankie being as much an annoyance, he is someone who Verity is coming to depend on. That is one thing that kind of bothered me. I felt like he was starting to get used instead of being a partner.

I definitely felt more drawn into this book than I did with the first one, so I think I was suffering the “first series book” syndrome with Southern Spirits. I’m normally not a cozy mystery reader, but I did enjoy this one. Book three is next for me, and I’m interested to see just what Verity and Frankie get into next. It will also be fun to see what happens with Verity and Ellis!

I connected with the narration much better than with the first book. It flowed better and the high energy parts did not seem to be so fast and overly rushed. Definitely a better rhythm.