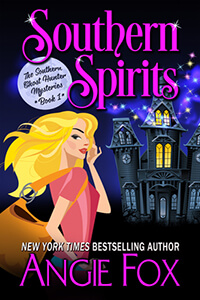 When out of work graphic designer Verity Long accidentally traps a ghost on her property, she’s saddled with more than a supernatural sidekick—she gains the ability see spirits. It leads to an offer she can’t refuse from the town’s bad boy, the brother of her ex and the last man she should ever partner with.

Ellis Wyatt is in possession of a stunning historic property haunted by some of Sugarland Tennessee’s finest former citizens. Only some of them are growing restless—and destructive. He hires Verity put an end to the disturbances. But soon Verity learns there’s more to the mysterious estate than floating specters, secret passageways, and hidden rooms.

There’s a modern day mystery afoot, one that hinges on a decades-old murder. Verity isn't above questioning the living, or the dead. But can she discover the truth before the killer finds her?

Verity Long is so down on her luck. Practically homeless because of small town gossip. She is willing to do pretty much anything to keep her family home. When she accidentally releases a ghost that she can see it is quite a surprise and makes her last night in the house interesting.

The fun part is Frankie, her new ghostly buddy is a former gangster. He has a great idea on how Verity can get some money to keep the house. He gets Verity involved in ghostly adventure. Things turn out really interesting for her, and she gets at least a start to the path of keeping her home as well as giving a local policeman ideas on Verity’s powers.

Of all the people Verity should work for, it would be her ex-fiancé’s family. But she cannot pass up the opportunity Ellis is presenting her with.

Verity finds herself in deep with these new powers Frankie can give her and she works at the surprising mysteries that pop up despite being scared out of her mind.

It took awhile for me to warm up to Verity. I just didn’t feel a connection. I found her a bit of a whiner. The more we dove into the story and the more Verity pushed on despite her fear, I grew to appreciate her a little more. She was able to put a lot of her fear to the side and not only discover and investigate an unsolved crime, but she was able to put some spirits to rest.

I liked the slow beginnings of something between Verity and Ellis. That will be an interesting situation if something happens there.

The timing of the clues kept you interested enough to wonder just what was truly going on. The ending was a complete surprise but I just didn’t feel the danger involved in the ending scenes. That may have been my lack of connection to the characters. Southern Spirits was still interesting enough that I enjoyed the read. I also may have that “first book in a series” syndrome. I will be continuing on to see how Verity’s character evolves and what new mystery can come up in their little town.

I found the narration very high pitched and rushed, like everything was in panic mode. This may have contributed to my feelings that Verity sounded like a whiner. The timing evened out more towards the end of the book as we fell into a groove.