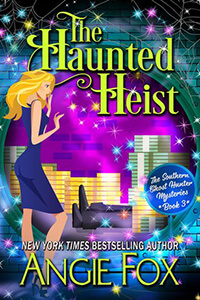 Just because she can see the dead doesn’t mean Verity Long wants to spend her days hunting ghosts. Instead, she’s over the moon to land a marketing job at the local bank…until she finds her new boss dead in the vault. Even her ghost friend, Frankie, knows that's no way to start a career.

Relieved to let the police take charge, Verity steps aside, bound and determined to keep her ghost sightings to herself. But when she learns the main suspect in the murder is a very crooked, very dead mobster, Verity knows it's up to her to solve the case.

She teams up with her ghostly gangster buddy Frankie, as well as the irresistible and charming Ellis, as the three of them search haunted mob hideouts, hidden passageways, and historic cemeteries for the facts behind the heist of the century—and a modern-day motive for murder.

Too bad uncovering the truth could very well make Verity the next victim...

The Haunted Heist starts out with things looking up for Verity. She may be able to get out of this ghost hunting thing and get a regular job! Now if she could just get Frankie’s ashes from the bin in her house, she’d be all set.

But, trouble follows Verity everywhere, so of course her interview with the bank is crashed by a murder. We meet some old friends of Frankie’s and his knowledge and friends come in quite handy. They guide Frankie and Verity to a possible mobster ghost suspect.

Verity wants to stay out of this investigation. She’s determined to get back to a normal life with a real job. Unfortunately, it seems there may be some ghostly involvement in the murder. Verity, Frankie and Ellis have sort of formed a team. Although I feel like Frankie is not quite so keen on being involved. I think he is tired of it all. We had some fun when Verity and her ex-potential mother-in-law come face to face. We kind of see how difficult things will be if Ellis and Verity come out of hiding with their relationship.

The mobster ghost and his ghost girlfriend were really fun to work with. Although spending time with them could get dangerous. You kind of get left with two villians in this story, but one was a bit more obvious than the other. We had a great ole time when everything comes to a head. Verity’s powers come in very handy in saving the day again.

Some of the ghosts are becoming regulars and are really fun to revisit. It seems that Verity’s ghostly encounters are not all bad. The Southern Ghost Hunter Mysteries has kind of brought me back to the pacing of a cozy mystery. I’ve enjoyed each installment more. I’m looking forward to see what comes next for this crew and if poor Frankie gets his ashes back!