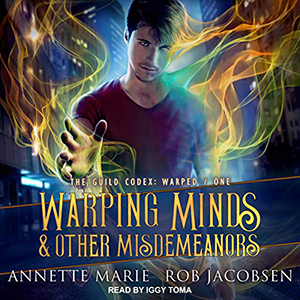 My name is Kit Morris, and welcome to my warped life.

Picture the scene: Me, an average guy with psychic powers—not that my abilities are in any way average—just trying to scrape by in a harsh world. So maybe I've conned a few people, but did I really deserve to be thrown in MPD jail alongside magic-wielding serial killers?

But her hardass attitude and “Arcana prodigy” status aren’t enough to bring down my former best friend, who slipped through the MPD’s fingers and is days away from unleashing untold horrors upon the city. Or he’s going to steal something. I don’t really know.

Whatever he’s up to, that’s why I’m sitting in an interrogation room with Lienna. And that’s why I just offered myself as her temporary new partner for the purposes of thwarting my ex-accomplice.

And that’s how I’m going to escape. I might even help with the case before I cut and run.

I haven’t researched too deep into this book, so I’m not really sure why we have a second author. The Guild Codex world so far has been written by Annette Marie until now. I was thinking that maybe we were bringing in a male author since the book is mainly from a male POV. But I was also thinking about one of the Guild Codex: Spellbound that had Kai’s POV. No matter what the reason, we have a second author. I’m not sure if that is going to contribute to the flow of the story or not.

Warping Minds & Other Misdemeanors is the first in the Guild Codex: Warped spin off. It is set in the same Guild Codex world so there is character bleed over. We are following Kit who is a magic wielding guy who really doesn’t fit in anywhere. He finds himself in situations and you can just can’t predict what he is going to do or where his loyalties lie. Kit just has too many influences from both sides. He’s looking out for himself, for sure, but you can see at times he wants to do things for others. I’m not saying he’s the best guy, he’s just very unpredictable.

I’m not sure if it is the second author, or Kit, or just his POV, but I was not as into this book as I am the other two Guild Codex worlds. As far as I know there are two more books, with a third coming in the Warped series, but I also see that there is another Guild Codex spin off coming that is going to feature Zak. THAT I’m very excited for. I love his character and can’t wait to get more of him. I really don’t know if Marie is going to continue to build all the arms of the Guild Codex together. I’m not sure I want to continue Warped but need to read it to understand what happens in the Guild Codex: Unveiled. I hope that’s not the case.

Readers are ok to jump right into Warped without reading Spellbound & Demonized, at least for this first book, as I didn’t see a lot of cross over. Maybe I will continue on just to see if there is. I did like Warping Minds & Other Misdemeanors, just not as much as the other Guild Codex books. I hope others had a better experience. If so, let me know in the comments what part of this book appealed to you!