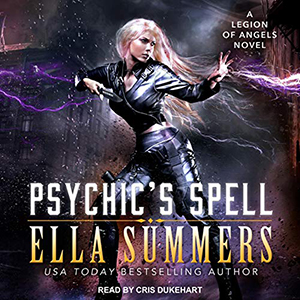 In the immortal war between gods and demons, one woman’s past holds the key to humanity’s future.

One year after joining the Legion of Angels in New York City, Leda Pierce returns home to visit her family in Purgatory, a rough and rugged frontier town that borders the plains of monsters. Leda’s family reunion is cut short, however, when her little sisters are captured by supernatural mercenaries.

Together with her angel lover Nero, she sets out to save them. Besieged by monsters, assailed by powerful foes, Leda knows this rescue mission won’t be easy. What she doesn’t expect is that it will bring her face-to-face with the secrets of her buried past.

The danger in Psychic’s Spell stepped up a notch and the threat to Leda’s family makes this a lot more personal. New powers are exposed. Not just the Psychic’s Spell Leda will earn, but also powers her sister’s carry. We learn a lot of new things about Leda and her sisters, including Leda’s heritage which will put her in terrible danger.

Psychic’s Spell was an exciting ride with plenty of action. All details and revelations were timed beautifully amidst the battles fought. There were some pretty big losses, including one that nearly brings the Legion to it’s knees. I was enthralled with the story and caught up in the ups and downs. What a roller coaster ride! Then the ending! What could possibly happen to Leda next?! She hasn’t even been in the Legion a year and has fought more monsters and battles than someone who has been in the Legion a lot longer.

I am so glad I waited for the audio. Cris Dukehart keeps the adrenaline running with her narration of the action and emotional scenes. So worth the wait!