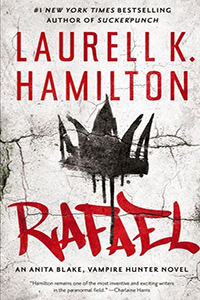 Rafael, king of the wererats, must fight to the death to defend his crown. He wants Anita Blake, one of his closest allies, with him as he faces an opponent unlike any he’s faced before. He will ask Anita to risk everything to be at his side.…

But some of the wererats fear that Rafael depends too much on Anita and her ties to the vampires. They believe that there is only room in America for one supernatural king, and Rafael will turn them into nothing more than food for the bloodsuckers.

Among his enemies, a new challenger has arisen who is younger, hungrier, and has dark secrets that could destroy both the wererats and the vampires. Rafael will go into the magical heart of his people to find the power and violence that he needs to save them all, or die trying.

I am normally pretty apprehensive about the newest books in this series. I have felt like they have all revolved around Anita’s need to feed or some obsession with her. There was some of that in Rafael, but I felt there was more action and adventure. That evened out the story for me so I wasn’t getting my eyes stuck from rolling them every time Anita fell into bed with one of her appointed men. I have also categorized this installment, and probably will continue to categorize this series as urban fantasy instead of paranormal romance. I just feel like there isn’t much romance left to the series.

There was more about Rafael and how his role in the shifter world was evolving. The threat to his status was in jeopardy and he has been challenged by someone that will surprise you. Rafael must win this fight but it is a lose-lose situation for him. Then everything goes to hell and an evil is revealed that has been planning Rafael’s downfall all along as part of their plan to get to Anita and Jean Claude.

Despite there being a few moments of content that I feel has gotten kind of old, I was actually quite excited about the amount of action and suspense Rafael contained. If you are still reading this series, I’m sure you will like this one. Because it is focused on Rafael, I feel like it might be a book that a former series reader could pick up and not have to know too much back story to the last few books.